Jake Higginbottom carded two under par in his third round at the Masters to finish 3 under for the tournament. He is the leading amateur in 8th position.

His four birdies and two bogeys for the day included a neat birdie from the greenside bunker at the 9th. 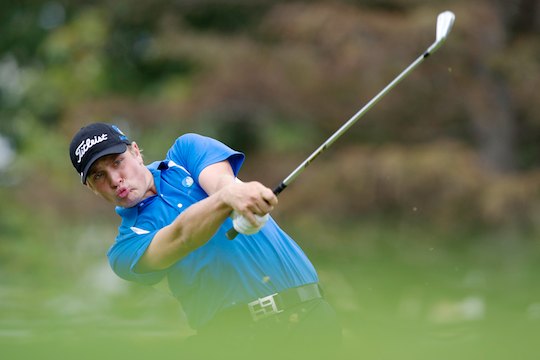 Higginbottom has not had the best of seasons in the northern summer. Missing cuts in premier tournaments in Scotland and the US.

Matters picked up for him on his return to Sydney winning the City of Sydney Amateur in September where he beat NSW’s Dimi Papadatos in a playoff. He followed this by finishing 35th in the WA Open.

He was planning to try for a European Tour card being within the top 15 world amateur rankings. This ranking would advance him to final stage of qualifying school. These plans were scotched at the last minute, as his ranking was just 16 on the relevant cut off date.

Jake said, “I now plan to remain amateur for another year and play in the northern summer. Maybe not as much in the UK though in 2013. I’ll probably focus on the US.”

“Next week I will play the BMW NZ Open in Christchurch. I know the course well having played the tournament last year.”

Higginbottom will certainly be looking for a top ten finish there.

Jake is from Newcastle but is a member of The Australian Club in Sydney and is coached by Gary Barter.

Other amateurs playing the Masters include Cameron Smith who is 1-under tied 13th. Smith led the Australian team at the Eisenhower Trophy in Turkey last month.

Matt Stieger, a former member of Golf Australia’s National Squad, who turned pro last month will want to put today behind him. He shot 5 over to leave him at 6 over for the tournament and tied 55th. Work to be done on Sunday for him.

Disappointment today for Dan Nisbet who also left the amateur ranks recently. He is in the USA trying for his PGA Tour card.

After blitzing the field in the first qualifying stage of Q-School he failed to make the cut in the Second Stage to move to the final stage.