Jake Higginbottom will take some stopping at this Riversdale Cup.

The world number 13 commands a seven stroke margin moving into the final day after rounds of 64-68-68 to have Higginbottom at 16-under-par ahead of defending champion, Nathan Holman. 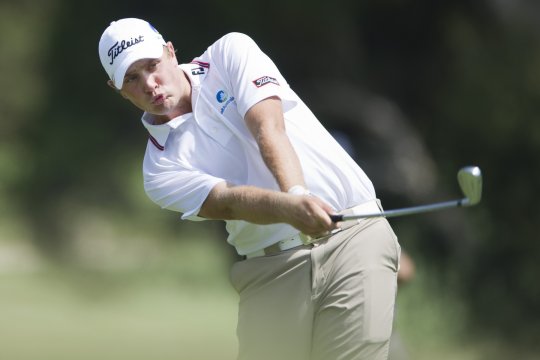 Jake Higginbottom is at 16-under-par after rounds of 64-68-68, seven strokes ahead of Nathan Holman moving into the final day of The Riversdale Cup (Photo: Anthony Powter)

Higginbottom has played majestically around the superb Riversdale layout. His irons crisp and putting solid.

“It’s always good to get off to a fast start,” says Higginbotton regarding his opening round of 64.

“You still have to play good again all the top boys like Cameron [Smith], Nathan [Holman], Geoff [Drakeford] and all the other boys. This is a course where I don’t think that you need to hit driver and normally if I’m pitching all right, I’m playing all right.”

It is not that the rest of the field at this Riversdale Cup has played poorly. Rather, Higginbottom has been playing in a different zone.

“I think this course suits my iron play,” says Higginbottom, who made the cut in every professional event he entered this season, including a runner-up finish at the NSW Open.

“I’m getting in the right positions and opening up opportunities with my wedges. The putts rolled in today as well and that helps.”

Closing a seven shot deficit will prove problematic for Higginbottom’s nearest contenders and they know a final day low round is needed.

Holman, winner of the Master of the Amateurs a few months back, is the nearest challenger to Higginbottom at 9-under-par. Holman knows the challenge confronts him to defend a title he so dearly won last year over Matt Stieger in a three-hole playoff.

“I’ll need to go low to have any chance,” says Holman.

“Jake is playing so well and it’s unlikely that will change tomorrow. If I can get into a position around the back nine and apply some pressure, you never know what might happen. But it will be tough.”

A stroke behind Holman and in a tie for third position at 8-under-par is Christopher Brown and Rory Bourke.

Daniel Nisbet continues to produce solid tournament rounds with the Lake Macquarie Amateur champion carding 70-72-67 to be at 7-under-par and in 5th position, a stroke ahead of Cameron Smith.

Low scores are traditional at The Riversdale Cup.

Last year Matt Stieger and Nathan Holman forced a play-off after finishing at 8-under-par. The year before Jin Jeong was at 13-under-par before rain forced tournament organisers to reduce the tournament to three rounds.

Higginbottom has already surpassed previous winning scores and Jordan Sherratt’s record winning 21-under-par total of 2009 looks to be in jeopardy.

This year’s Riversdale Cup is there for Higginbottom’s taking and it will take a record low round by either Holman, Brown or Burke to catch him.