Jake Higginbottom has defeated Dimi Papadaos in a playoff to claim the City of Sydney International Amateur at Moore Park Golf Club.

The pair finished the three-round world ranked amateur event at 5-under-par after Higginbottom stormed home with a final round of 66, birdieing the last hole to forced the playoff. 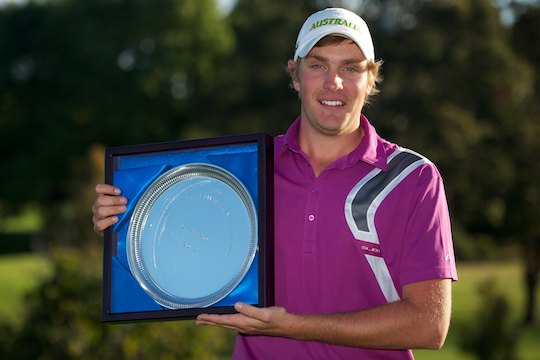 The event had attracted World Amateur Golf Ranking status from the R&A and a stellar field, including players from the Elite Golf NSW squad, and the tournament continues to grow in stature each year.

The staging of the tournament is a credit to the organisers and sponsors of the City of Sydney International in an environment where numerous main amateur events struggle or have popped off the map in recent years.

The win was significant for Higginbottom as well as timely.

Whist Higginbottom sits comfortably insider the world’s top-20 in the R&A ranking at 17, the highest Australian, his recent international results in the United Kingdom and the United States were not what he had hoped for.

“I struggled in the US and UK this season,” said Higginbottom, who plans to attend stage 2 of the European Tour School in November.

“It’s great to get this win against a strong field and to play well on a demanding layout. I played strongly over the closing holes to force the playoff and was able to get the job done. My game certainly is on the improve after a period where I was struggling overseas.”

With the defence of his win last year at the Keperra Bowl three week’s away, victory at the City of Sydney Amateur is also timely for Higginbottom – the confidence booster that he needed and was after.

“I have been working hard on my game with Gary [Barter] after the setbacks overseas,” says Higginbottom.

“My game today held up under the pressure. I drove the ball well today and it was a good feel and a good tournament to win.”

Higginbottom’s last major amateur win was at the 2012 Riversdale Cup in March where the 18-year-old Novocastrian blitzed the field with a runaway seven stroke win after leading the field from the opening day.

“I went to Europe and the US feeling my game was ready, but looking back I probably wasn’t quite there.”

“I learn’t a lot this trip to the US. I’ll see how things go at European Tour School, if something eventuates there, we will look at that. Otherwise, I plan to focus on another tour next year in the States as a amateur as well as winning as many of these events back home.”

Jordan Zunic is another impressive player making a name for himself and again proved to be a player to watch after finishing at 3-under-par to finish third, two strokes from Higginbottom and Papadatos.

Zunic finished in a tie for second last month at the Mandurah Amateur after reaching the top-32′s at the British Amateur in June. A semi-finalist at the 2012 Australian Amateur, Zunic’s game and standing in these main amateur events continues to impress.

Ruben Sondjaja fired a peerless final round 64 – a course record – to move up into 6th position to finish with a 2-over-par total.