Higgo brings European Tour form to US for Palmetto win

South African Garrick Higgo has won the Palmetto Championship at Congaree on Sunday for his first PGA Tour victory as the 22 year-old overtook 54-hole leader Chesson Hadley, who was looking for his second PGA Tour win.

He also benefited from a late collapse by Hadley, who held the lead after the second and third rounds, and was seeking his first tour win since 2014. Hadley was still ahead by two shots at the 16th hole, before a poor tee shot led to a bogey and he then failed to get up and down on the 17th and 18th holes to give away the win. Hadley finished with a 75.

“It’s amazing,” said the new World No. 39 who began the final round six shots behind Hadley. “I just stayed patient all week.”

“I’ve just gone to another level now. So I’ll just see what my game can do. I enjoy playing and seeing what my game does and where it takes me. I’m going to continue with that. I mean, my dream’s always been to play on the PGA Tour permanently, so at the moment, I’ll focus on that, see if I can keep going.”

What’s In The Bag: Garrick Higgo

Sunday’s win was Higgo’s third victory worldwide in the past two months after he collected two wins on the European Tour. This time last year he was ranked close to 200th in the world.

Higgo turned professional in early 2019 and won twice in his first full season on the Sunshine Tour, at the Sun City Challenge and the season-ending Tour Championship. He also recorded a runner-up finish in the Challenge Tour co-sanctioned Cape Town Open during the 2019–20 season, and finished 6th on the Order of Merit. 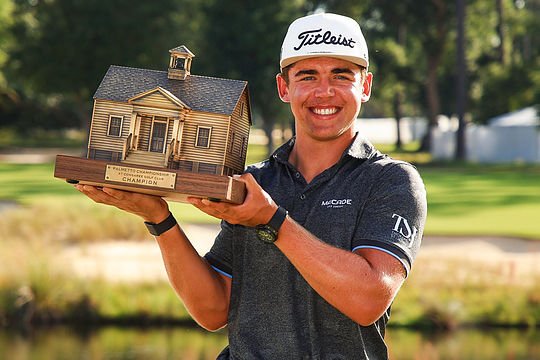 In September 2020, at the Open de Portugal, a dual-ranking event on the European and Challenge tours, he shot a bogey-free final round of 65 to win by one stroke, and gain a one-year exemption on the European Tour. Then in April 2021, Higgo secured his second European Tour victory at the Gran Canaria Lopesan Open.

Higgo now heads to this week’s US Open at Torrey Pines following his exemption courtesy of a rise up the world rankings. It was only the second PGA Tour appearance for Higgo who tied 64th at the PGA Championship.