South African sensation Garrick Higgo has joined Tiger Woods in the records books with victory at the Canary Islands Championship.

Higgo, 21, posted an ace and seven birdies in a closing 64 to win by six shots with a 27-under par victory tally on the spectacular clifftop Costa Adeje course at Tenerife. 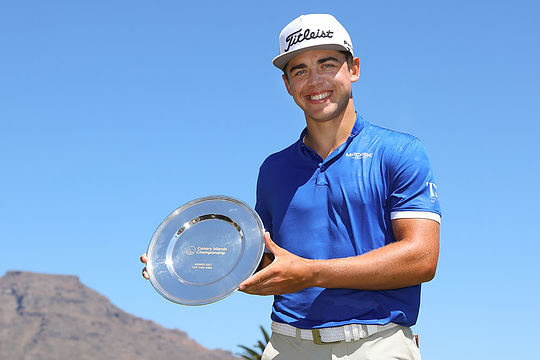 The Joburg-born Higgo’s winning total was just two shots shy of matching fellow South African, Ernie Els, who owns the Tour 72-low of 29-under set at the 2003 Johnnie Walker Classic in Perth, which he won by ten shots over Aussies Stephen Leaney and Andre Stolz.

It had taken Higgo twenty-four events to win twice on the European Tour, securing victory at last September’s Portugal Masters before capturing a second title last fortnight at the Gran Canaria Lopesan Open.

Now in his 26th Tour event, Higgo has joined Woods as the quickest player since 1990 on golf’s leading two Tour’s to win three events after Woods won his third of now 109 titles in early January 1997 and in just 26 starts.

“I’m really tired but I am just really happy and thankful,” said Higgo, who is now an incredible 68-under for the three events in the Canary Islands.

“I did feel pressure at the start as I was the first time I’ve led going into a last day, and in this game anything can happen. So, to win three events in since my first European Tour victory last September is pretty special and I’m delighted.”

Higgo, who went into day four leading by two, was in a class of his own stretching his lead to seven shots after he aced the par-3 seventh hole and the first hole-in-one of the pro career.

He then picked-up four other birdies to secure the win and prize money of €234,070.

Higgo’s sixth pro career victory will see the left-handed Higgo jump to around 51st in the world and now just five places shy of golf’s top-ranked lefty in Scotland’s Robert MacIntyre. He also moves from 11th to 5th place on the Race To Dubai.

Higgo will celebrate his 22nd birthday on Wednesday and the opening day of the BetFred British Masters at The Belfry.

The South Africans have now won the last three European Tour’s events along with the Magical Kenya Open and Kenya Savannah Classic in March.

Scott Hend was the only other Australian to make the cut finishing in a share of 51st place.

Jack McLeod and Austin Bautista failed to make it through to the weekend.

The European Tour now heads to England for the British Masters before the US PGA Championship on May 20th.