Australia’s Whitney Hillier lived up to her top billing as she charged down defending champion and hot favourite Kelly Tan to clinch the 29th Malaysian Ladies Amateur Open in dramatic fashion.

The 21-year-old National Squad member from Perth, who was the top-ranked player in the field at 15th on the World Amateur Golf Rankings, bounced back from a poor second round, lighting up the East Course at Kuala Lumpur Golf & Country Club with a sizzling six-under-par 65 to beat local challenger Kelly by one stroke. 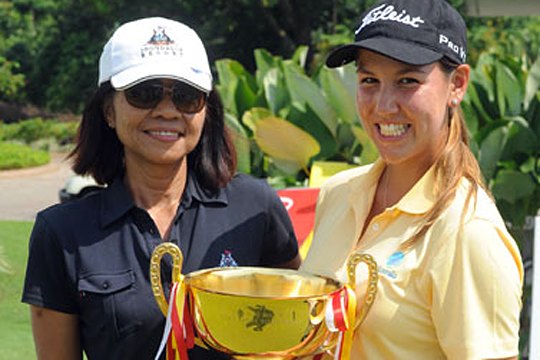 Whitney Hillier and her mother are all smiles after her 2012 Malaysian Amateur win (Credit: Malaysia Golf)

Eight strokes off the pace at the start of the round, Hillier traded seven birdies against a single blemish on the par-four eighth, including a run of four birdies in six holes on the inward nine, to become the first-ever Australian winner of the prestigious national ladies amateur championship.

“It’s just been an amazing week really. I just went out there today with no expectations and had so much fun and support out there. I’m really happy with the way I played today and being the champion is a great bonus,” said Hillier.

“I started off well, mixing three birdies and a bogey on the front nine and went into the back nine with some good thoughts and vibes and it definitely got me rolling those three consecutive birdies from the 13th which put me in contention.”

“My putting was a lot stronger today. My ironplay has really improved day-on-day, the first day it was really scrappy but I managed to post a good score.”

“Yesterday it didn’t do the trick but it really came to the fore today and I was on fire,” she added, noting that her good putting average was key to her success.”

The West Australian adds the Malaysian Amateur title to an already impressive list of titles in 2012 including the Lake Macquarie Women’s Amateur and the Women’s Riverdale Cup earlier this year.