Western Australia’s Whitney Hillier has broken a decade long winless drought taking out the Aramco Team Series – Bangkok as part of Team Hillier in the US$500,000 event.

The team, consisting of Whitney Hillier (captain), Chonlada Chayanun, Krista Bakker and businessman amateur Pattanan Amatanon, carded a final round 15-under for a total of 31-under in the two-round Ladies European Tour event in Thailand. 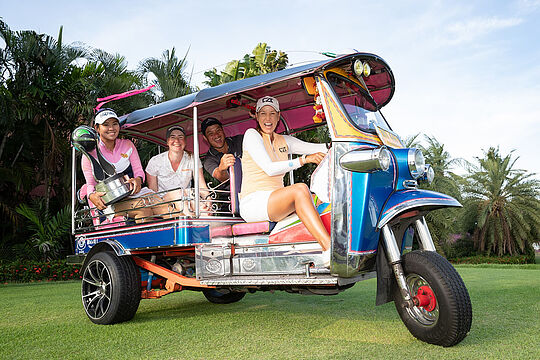 Captain Hillier and her team celebrate their win (Credit: LET)

“I’m so proud of my team,” said Hillier. “Even from the start of yesterday morning we just had a good vibe. Everything just flowed and obviously we played great golf, but we had a lot of the fun, so that was the most important thing too.”

“This is my tenth year on tour, and for my first win to be in a team event, like that’s pretty cool.”

Hillier secured US$33,533 for her equal share of the winner’s purse and another US$11,736 for 8th place in the overall three-round Aramco Team Series – Bangkok event won by Belgium’s Manon De Roey.

The win couldn’t come at a better time with the 31-year-old Hillier heading to England for Women’s US Open sectional qualifying at Buckinghamshire Golf Club in London on Monday.