New Zealand’s Tyler Hodge has won the Australian Boys’ Amateur by the narrowest of margins at Bribie Island Golf Club.

Hodge finished with rounds of 69-68-71-75 to win at 5 under par after sinking a seven foot putt on the last to finish one clear of Queensland’s Viraat Badhwar. 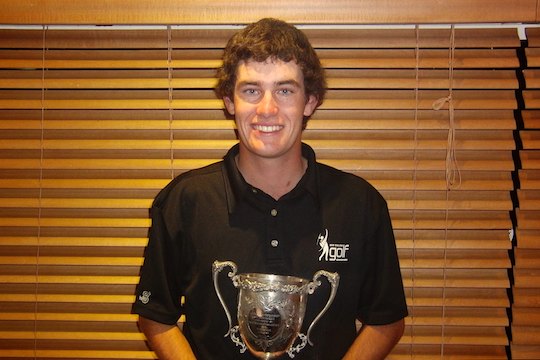 Hodge led Badhwar by eleven shots with one round remaining but the Australian whittled away at the advantage with a bogey on the last hole denying Badhwar a place in a play-off with Hodge.

Badhwar stormed him with a final round course record 7-under par 65 to finish at 4-under par.

Hodge is one of only four Kiwis to have won the Australian boys’ championship, with New Zealanders Grant Waite (1981-82), Phil Aickin (1980) and Saali Herewini (1992) all having their name on the trophy along with Australians Adam Scott and Jason Day.

“I’m feeling a fair bit of relief at the moment,” said Hodge.

“That was the first time I had been in a tournament that big and leading. I definitely got nervous down the stretch but felt I handled it not too badly.”

With the win, Hodge earns a place at this year’s Australian Open at The Lakes Golf Club in December.

“That really hasn’t sunk in yet. It’s miles away the biggest thing to happen in my career so far,” Hodge added.

Lucas Herbert and Ricky Kato and Mitchell Venables shared third place, one stroke behind Badhwar in a tightly packed leader board.