American Lee Hodges won the WinCo Foods Portland Open on the Korn Ferry Tour on Sunday and with that a start in the US Open scheduled to begin Sept. 17 at Winged Foot Golf Club in New York.

Hodges shot an even-par 71 final round sinking a birdie putt on the final hole to secure victory at 11-under-par. The win vaulted the former UAB and Alabama golfer from 15th to third in the Korn Ferry Tour points standings, with the top-5 golfers after Sunday’s tournament locked into the field for the 2020 US Open. 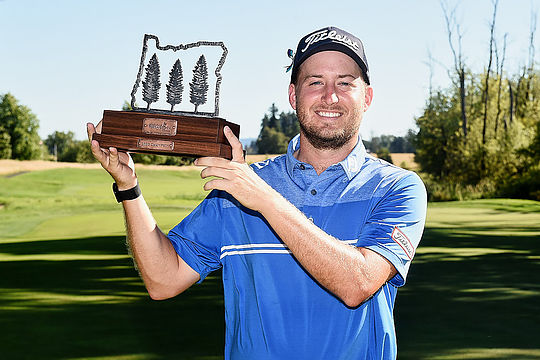 “It will be sweet to play in a major,” said Hodges. “It will be special. I’ve always admired the US Open. The way you have to play out there, it’s proper golf. I think I play a lot of proper golf, and I hope to go and play well.”

Hodges, 25, finished two shots clear of four players, including playing partner and third round co-leader Paul Barjon, who fought through a roller coaster of a round that included five birdies, three bogeys and two double bogeys on his way to a 2-over-par 73.

It is Hodges’ second season on the Korn Ferry Tour after spending a season on Mackenzie Tour, the PGA Tour’s circuit in Canada. Sunday’s win is his biggest so far and adds to his tied 3rd at the Panama Championship earlier in the season and his tied 6th at the Korn Ferry Challenge at TPC Sawgrass.

Brett Drewitt was the best of the Australians finishing in a tie for 11th position at 6-under-par followed by Ryan Ruffels at T22 on 4-under.

Harrison Endycott was two-shots back to finish equal 37th with Jamie Arnold in a share of 48th position.

Brett Drewitt moved from 78th to 56th with his good result on the weekend, inside the top-75 qualifiers for the Korn Ferry Finals along with Jamie Arnold who is at 69th position on the money list.

With two events on the regular season left a solid result by Ruffels will more than likely see him into the top-25.