Kirsty Hodgkins fired a 5-under-par 68 to claim the women’s Riversdale Cup with a one stroke win from Japan’s Yumi Kudo last Sunday in Melbourne.

Hodgkins started the final round seven behind Kudo who looked certain to claim the title but faulted with a closing 3-over-par final round. 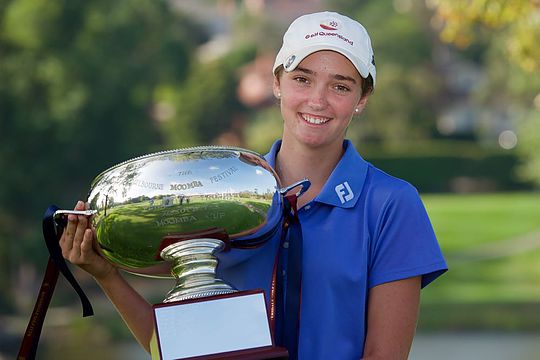 Hodgkins to her credit applied the pressure early going out with an impressive 5-under-par 32 after four consecutive birdies from the 4th through to the 7th hole, the only blemish to her card was a late bogey on the 16th.

Kudo was not able to respond with a double bogy on the 16th adding to her final day woes. Bogeys on the 7th and the 1st had also dinted her momentum as Hodgkins continued to apply the pressure.

“That’s one of my best ever closing rounds,” said Hodgkins.

“To win an event like this is amazing. I just kept trying to focus on my own game an not worry about the others. I’m just so happy with the result and the way that I played.”

Defending champion, New Zealand’s Muchin Keh finished in third position at 5-under with the top three the only players to better par for the tournament.

Queensland’s Karis Davidson finished at 2-over-par and in fourth position, with Japan’s Mone Inami rounding out the top-5 at 3-over-par.