American Tom Hoge fired a closing round of 68 to hold off a fast finishing Jordan Spieth to win the Pebble Beach Pro-Am on Sunday.

It was Hoge’s first PGA Tour victory following 202 starts and after being runner-up twice, most recently at The American Express a fortnight ago. Hodge finished at 19-under for a two stroke win and a US$1,566,00 prize cheque.

“I’ve always kind of got myself into position and then just felt a little bit uncomfortable on Sundays out there,” said Hoge.

“So finally today, I felt great the whole day and felt real calm, kind of standing over those putts you need to make down the stretch. It’s awesome. You work through so many hard times to be here and to finally pull one off feels incredible.”

Hoge also earns an invitation to Augusta National for the Masters, along with a two-year PGA Tour exemption. Until this year, his best season on the PGA Tour was in 2020 when he was 50th in the FedExCup Series and won just over $1.8 million.

While former World No.1 Spieth was disappointed in the end result, all the signs point towards another PGA Tour title being not too far away.

“I’ll look back and kick myself for not winning this tournament…but certainly if you told me I would have the lead on Sunday on the last Thursday I would have said I’ll take that,” said Spieth.

“So played well, tempo got a little off on the driver as kind of nerves were up and such. I’ve driven the ball really well the whole week, and just kind of started missing some contact. So I’ll probably dissect that a little bit into next week and try and improve.” 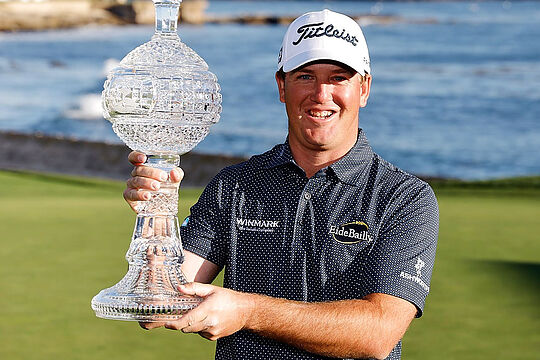 Beau Hossler posted a 71 to finish alone in third at 16 under. Troy Merritt and Patrick Cantlay tied for fourth at 15 under. Cantlay birdied three of his first six holes Sunday to tie for the lead, but he struggled down the closing stretch and consecutive bogeys at 15th and 16th damaged his chances.

Jason Day finished the best of the Australians in a share of 24th position a closing 74 hurting his chances after opening rounds of 68-66-70 saw him looking as an outside chance at victory on Sunday.

“To be honest, the last couple years have been a bit of a struggle,” said Day.

“I’m just looking at it like every day what can I do to try to get better. And I’m super, super obsessed with the golf swing right now, which is either a good thing or a bad thing, I don’t know how to take that. But I’m always talking to my coach every day and I’m always constantly working on it.”

“I just got to be really patient with that stuff, I know that it’s just around the corner.”