The victory is Holman’s third with earlier wins this season at the Riversdale Cup and Portsea Open Amateur.

“This is one of my biggest victories to win your own state title,” said Holman. 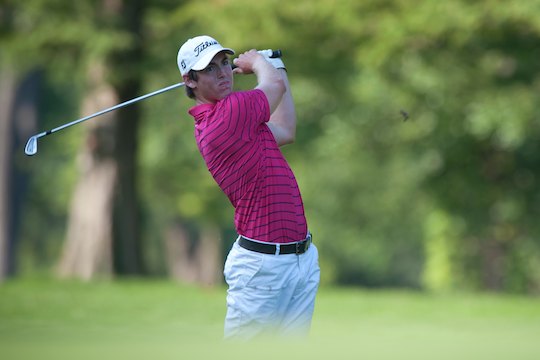 “I had belief in myself that I would be competitive this week and I’ve worked hard with my coach Marty [Joyce] and with Noel Blundell with the mental side of my game. It kind of all fell into place this week for me and the victory is sweet.”

Each match was a tough encounter and served only to sharpen Holman’s game as he became stronger with each win.

“This year’s field was one of the strongest in years,” remarked Holman.

“To come through it and collect the title is very rewarding. I was able to hold my game together at critical stages and keep my focus when I needed to. I kind of felt that with each win I was playing better golf and that made a big difference to other tournaments that I’ve recently played in.”

Arguably the most important match was Holman’s second round 1-up win over the in-form Geoff Drakeford.

Drakeford entered the Victorian Amateur with a runner-up finish over Todd Sinnott at The Dunes Medal a fortnight earlier and was the third qualifier moving into the match play series of these championships.

“The second match against Geoff gave me a lot of confidence moving into the next match with Rory [Bourke],” said Holman.

“I birdied the last three holes for wins to get the result and you like winning holes with birdies as that shows you’re playing well.”

Holman qualified 14th in the thirty-two man match play draw after opening rounds of 79-75 to make the 36-hole cut in the Port Phillip amateur by one before closing with rounds of 67-73.

“I only just managed to scrape inside the cut mark after an ordinary opening and second round.”

“I was then able to buckle down and get some impressive wins and carried my form through to the final.”

The victory for Holman was against a classy amateur field and confirms the 20-year-old’s standing as one of our most promising amateurs.

Holman’s world ranking has climbed to be inside the top-100 and to be currently Australia’s 9th ranked amateur.

“I’m mentally stronger than what I was playing in America a few months back,” says Holman who last month was promoted to the Australian National Squad by National Selectors.

“I’ve more belief in myself and what I can do out on the course. You obviously aim to win main events and when the result happens like at this championship, you know the efforts being worth it.”

Holman has a week long break travelling Asia before returning to play the Victorian Amateur starting 5th January, followed by the Australian Master of the Amateurs at Royal Melbourne and then the Australian Amateur the week after at his home club Woodlands.

“I’ve a great schedule ahead and with the Australian Amateur being played at my home club it sets everything up nicely.”

“Hopefully, I can get another win. That’s the aim.”