Nathan Holman remains in the box seat to collect another amateur title enjoying a five stroke lead moving into the final round of the Master of the Amateurs at Royal Melbourne.

Holman fired a three-under-par third round 69 to be a 8-under-par after earlier rounds of 67-72.

New Zealand’s Ben Campbell fired an impressive third round 7-under-par 65 to move into a share of second position with Daniel Nisbet at 3-under-par.

Ryan McCarthy and US Amateur champion Kelly Kraft are a stroke behind at 2-under in a tie for fourth position.

Six strokes behind Holman in a tie for sixth position is Australian Amateur champion Matt Stieger and Oliver Goss, who fired a hole-in-one on the 202 metre par 3 16th on his way to an impressive 8-under-par round of 64.

Holman started round four ahead of McCarthy and Nisbet and attributed his fine round to the success he had with the flat stick on Royal Melbourne’s slick greens.

“My putting got me out of some trouble out there today,” said Holman.

“I got off to a great start with some birdies, which is what I had to do. I was trying to build upon the four shot lead that I already had. It was nicer to play in the conditions today and I managed to putt well on these quick greens.” 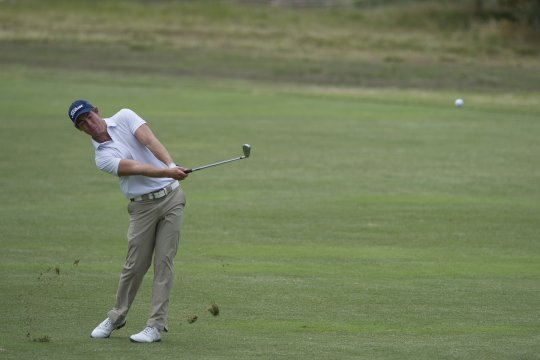 Nathan Holman takes a five stroke lead into the final round of the Australian Master of the Amateurs at Royal Melbourne. (Photo: Anthony Powter)

Ben Campbell was another to credit his putting for a fine round as he moved ten places with his stellar round of 65.

“I few weeks back I swapped to a belly putter and I’m feeling more confident inside ten feet,” says Campbell.

“It’s great to be in contention again moving into the final day of an event like this. I’ll need to shoot in the low 60′s to have a chance because Nathan [Holman] is playing well.”

Kelly Kraft is another to follow tomorrow as he’s only six strokes from Holman.

The world number four has fired rounds of 70-75-69 and appears to be at ease on Royal Melbourne’s West course which contains twelve of the holes played during last November’s Presidents Cup.

Ryan McCarthy’s chances of collecting another main amateur title should also not be discounted.

McCarthy has played consistent golf this week in Melbourne and is regaining the form which saw the young Tasmanian as our top-ranked amateur during the earlier part of 2010.

Today’s third round at the Master of the Amateurs had everything a tournament could want.

Royal Melbourne was in its usual pristine condition and 17-year-old Oliver Goss took full advantage of the conditions as he nailed a hole-in-one on arguably the hardest par-3 on the course. Goss was, at one stage, in the hunt for the amateur course record of 63.

Holman will take some stopping and Royal Melbourne does not give away low scores easily.

Play-offs are also not uncommon at the Master of the Amateurs with two of the last three years requiring a playoff to determine the champion.

McCarthy, Kraft, Stieger, Mills, Drewitt and Campbell all have the game to challenge Holman and make up the five stroke deficit.

It sets the stage for another fascinating final day for this tournament as they go in search of the green jacket and the spoils to the victor with starts at the British Amateur, Porter Cup, the Players Amateur, the Dogwood Invitational and the Canadian Men’s Amateur.