Holman leads Master of the Amateurs

Nathan Holman will take a four stroke lead into the third round of the Australian Masters of the Amateurs being played at Royal Melbourne.

Holman, a three time winner in 2011 with Victorian Amateur, Riversdale Cup and Portsea Open, fired rounds of 67-72 to be at 5-under-par.

Morning play was suspended due to adverse weather as strong southerly winds and driving rain played havoc against the field.

Winds up to 85 km/hr lashed the Royal Melbourne layout as putting became impossible.

Tournament organisers later cancelled the rounds carded by the morning groups and re-started the third round completely.

“That was the toughest par round that I’ve played for ages,” remarked Holman.

“Today was hard. There was the break in the morning whilst decisions as to continuing play was being made. Once we were back out there putting became a bit of a lottery.”

The four stroke buffer from his nearest rivals gives Holman plenty of confidence as he pursues his fourth main amateur title in twelve months. 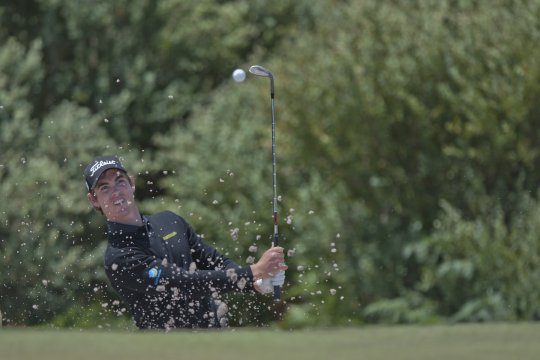 Nathan Holman escapes from the greenside buner on the 7th on his way to a second round 72 and the lead at the Australian Master of the Amateurs. (Photo:Anthony Powter)

“Conditions will be a little easier tomorrow as the greens with be softer,” says Holman.

“I’ll need to shoot another round in the 60′s to have a chance at this title. I’m striking the ball well and played the shots that I needed to out there today. I’m confident with my game and are looking forward to the round.”

Ryan McCarthy and Daniel Nisbet are in a share of second position at 1-under-par with McCarthy firing rounds of 72-71 and Nisbet carding scores of 69-74.

Two strokes further back at 1-over-par is US Amateur Champion, Kelly Kraft, and France’s Teremona Beaucousin.

“It was tough out there,” remarked Kraft.

“I’m within six of the leader and will need to move tomorrow. There’s a score to be had out there and hopefully tomorrow the conditions will be favourable towards scoring.”

Australian Amateur champion Matt Stieger and opening round leader, DJ Loypur, are at 2-over-par and in a tie for sixth position, with Stieger carding rounds of 70-76 and Loypur experiencing the variances of golf, carding a second round 80 after opening with a 66.

With no cut at the Australian Master of the Amateurs all players have the opportunity to make their move on the field.

Holman’s four stroke buffer will take some effort to erase.

Holman is swinging well, has the benefit of local knowledge having played Royal Melbourne numerous times before and is riding on a wave of success with recent wins.