Young Victorian Nathan Holman has posted the early clubhouse lead at the Emirates Australian Open, after signing for an impressive four-under 67 for a total of 285, one-over par.

Holman tapped in for an up and down par on the final green as the leaders were still doing battle with the tricky conditions on the front nine. 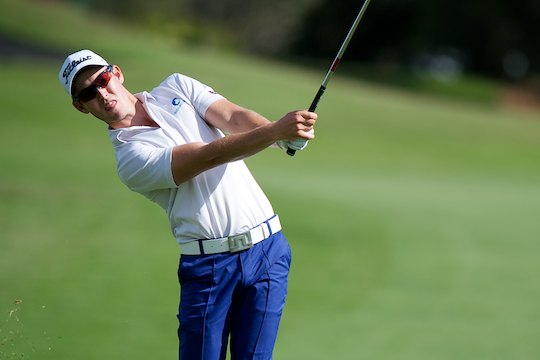 He was tied for 13th at the completion of his round, a position that is destined to improve as the day goes on.

“It was a good round of golf, I played well.” Holman said outside the scorer’s hut.

“I said to my coach/caddie (Martin Joyce) this morning that if I can give myself 18 chances and maybe take five or six of them, it would be a good round. So yeah, it was nice and clean.”

Holman mixed five birdies with a solitary bogey on the par-five 14th, which was deflating given the hole is playing straight downwind.

A deft trap shot from the left of the 15th allowed him to right the ship before posting a great birdie into the wind at the tough 16th.

“The save on 15 was probably one of the more important holes after making bogey on the par-five (14th). Another bogey there would have definitely halted any momentum that I had.”

Holman had his troubles down the 18th hole too but was able to salvage par after airmailing the green from the left bunkers with his third shot. Now it’s a matter of sitting and waiting to see how far up the leaderboard he might climb.

“There are only 12 guys ahead of me and it’s probably not going to slide too much. But if I can sneak into the top-ten then it’s obviously been a great week.”