Holman, Schneider close in on Nisbet

Daniel Nisbet holds on to the narrowest of leads over Nathan Holman and Marcel Schneider following the second round of the Lake Macquarie Amateur being held at Belmont Golf Club, south of Newcastle.

Nisbet is at 11-under-par with rounds of 65-68, a stroke ahead of Master of the Amateurs champion Nathan Holman and Australian Amateur champion, Germany’s Marcel Schneider. 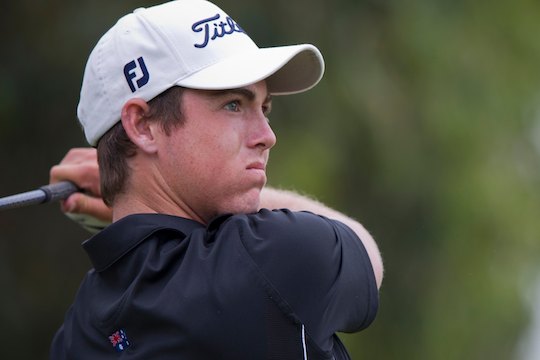 Nathan Holman has moved into contention to be one stroke behind second round leader, Daniel Nisbet, at the 2012 Lake Macquarie Amateur at Belmont Golf Club (Photo: Anthony Powter)

Holman has fired back-to-back rounds of 67 with Schneider carding opening scores of 66-68. They have a two stroke lead over Anthony Murdaca and Callen O’Reilly, who sit at 8-under.

Local favourite Jake Higginbottom rebounded from his opening round of 70 with a stellar second round of 67 to be in a share of sixth position at 7-under-par along with James Gibellini and South Australia’s Brad Moules.

The cut came in at 3-over-par with the majority of the top Australian amateurs through to the weekend.

Cameron Smith is currently in a tie for 12th position and six behind Nisbet after rounds of 69-70 to be at 5-under-par along with Ryan McCarthy and Rory Burke.

Nisbet is due for a win having being runner-up in his last three events.

In the nine months since his return to tournament golf, Nisbet has been nothing short of stunning with precision iron play and the ‘never-say-die’ approach with his driver.

Holman and Germany’s Marcel Schneider are both in stellar form.

Nisbet was gutted and yet has rebounded well and remains the favourite to take this Lake Macquarie Amateur out wire-to-wire.