Nathan Holman is set to defend his Australian PGA Championship title this week on the Gold Coast when play gets underway tomorrow.

Holman’s victory twelve months ago was the springboard the Victorian was after, elevating the 25-year-old overnight onto the European Tour. 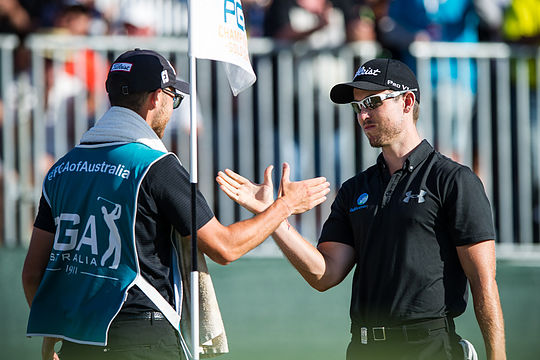 Currently ranked 303rd in the world, Holman has experienced mixed success in Europe with his best result outside the Australian PGA victory, a 8th place finish at the Maybank Championship in Malaysia.

Whilst it’s been an initiation into one of the world’s toughest tours, Holman is ready to return home where he has fond memories.

“I’ve obviously got some great memories from my win and I’ve had some flashbacks since getting here,” said Holman.

“Obviously having won the tournament here last year, you experience those emotions again and I feel comfortable on the golf course.”

“Knowing that I’ve played well here in the past is a great confidence booster and gives me some clarity in my head, so it’s very nice to come back here.”

Scott claimed two US PGA Tour victories in the early part of the year but wasn’t able to secure a top-15 finish in any of the four majors, and he hasn’t been ranked inside the world’s top five for nearly two years.

Scott said he was disappointed with his form over the last couple of weeks at the Australian Open in Sydney and World Cup of Golf in Melbourne but believes a return to Royal Pines can help him turn things around.

“I’ve won at Royal Pines before so I can definitely draw on that experience,” he said. “It’s a place I’ve played for 20-plus years, I’ve been going there since I was a kid.”

“I’m sure the support will be great for me as it has been the last couple of weeks, but probably some more familiar faces in the crowd. I’d certainly like to put on a bit of a clinic for them.”

Another player to watch this week is Kiwi Danny Lee who is making his championship debut.

“I am excited to play my first Australian PGA Championship. I have heard lots of great things about the tournament and am happy to be able to experience it myself for the first time,” said Lee, who at World Number 64 is the highest ranked male New Zealand player.

“2016 has been an incredible year playing at the Olympics and I am looking forward to finishing my season on the Gold Coast.”