Holman surges ahead at Maybank Championship

Australian Nathan Holman fired a flawless seven-under-par 64 to seize the first round lead at the inaugural Maybank Championship with Filipino ace Angelo Que leading the chasing pack on Thursday.

The 24-year-old Holman needed only 27 putts, including nine one-putts, at Royal Selangor Golf Club to lead in the US$3 million event jointly sanctioned by the Asian Tour and European Tour. 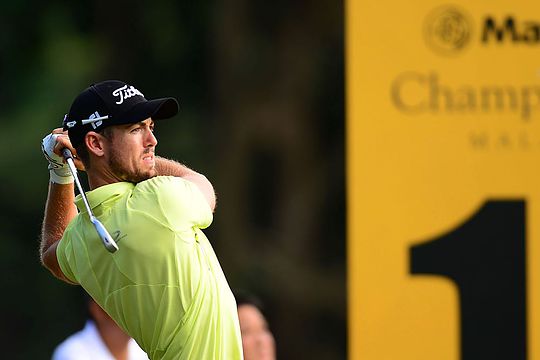 The colourful Que, nicknamed “Human Highlighter” for his bright sense of dressing, also sank seven birdies but a lone bogey on the 16th hole saw him end the day alongside Jorge Campillo of Spain, Frenchman Alexander Levy, American Peter Uihlein and English duo Tommy Fleetwood and Danny Willett, who is the world’s number 13.

Holman, who has featured on the Asian Tour over the past two seasons, was rock steady and whenever he found trouble, he got up-and-down on four occasions to keep the bogeys off the card at Royal Selangor, which is the second oldest golf course in Malaysia.

“There’re a lot of chances but you get in the rough and it can really grab you, so seven under, I’m really happy with that,” he said.

“I just played really well. Every part of my game was quite good and I was saying a few weeks ago that my game has been trending in that right direction so it was nice to get a really good one in.”

Veteran star Thongchai, the only player to lift three Asian Tour Order of Merit titles, struggled with his driver but his flat stick kept him in the hunt for a 14th Asian Tour victory.

“I didn’t have good drives but my putting helped me. I was bogey free and I felt very confident on the greens. I have no complaints. If you hit it on the green, you will have a good chance to score because I like the green speed,” said the former Thai paratrooper.

England’s Danny Willet, the highest ranked player in the field, holed a snaky birdie putt on his last hole to feature amongst the leaders.

“It was a very mixed bag. I hit it very nicely on the front nine but made nothing. It was one of those days where you put two very different nines together and got a good score,” said the in-form Englishman, who won in Dubai two weeks ago.