Nathan Holman has collected another major amateur title with a one stroke victory over Jordan Zunic and Nicholas Price at the Mandurah Amateur Open in Western Australia. 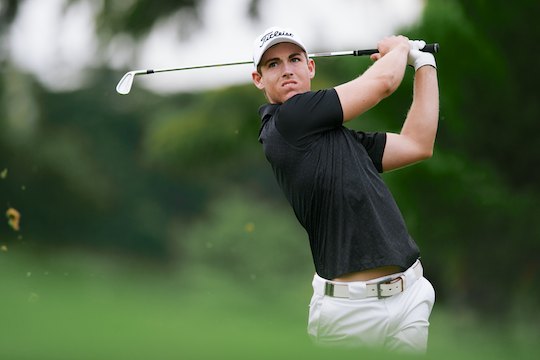 “It was nice to get another victory under the belt after a disappointing UK and US tour,” said Holman.

“It had been a frustrating time overseas for me. My game was not there as I was struggling with my putting and finding the fairways.”

“This week I held it all together and to close another event out is very satisfying.”

Jordan Zunic finished at 4-under-par, with only his opening round of 2-over-par, 74, damaging his chances of claiming his first major amateur title after following with rounds of 72-69-69.

Nicholas Price shared the runner-up position with Zunic with rounds of 69-71-72-72.

Oliver Goss, Michael Dennis and overnight leader, Brady Watt, finished in a tie for 4th at 3-under-par, after Watt recorded closing rounds of 72-74.

The victory was Holman’s fifth local win in eighteen months after securing the Riversdale Cup, Portsea Open, Victorian Amateur, with the Australian Master of the Amateurs his last win back in January at Royal Melbourne.

Holman is positioned just outside the top-100 world amateur ranking.

The win at the beginning of the Australian season gives the talented 21-year-old the much needed momentum following a disappointing summer in the UK and USA, where Holman’s best finish was a top-25 at the Porter Cup.