Holman wins Master of the Amateurs

Nathan Holman confirmed why he is one of Australia’s most exciting amateurs as he demolished a high class international field with a five stroke win at the Master of the Amateurs in Melbourne today.

Holman, 20, fired rounds of 67-72-69-70 to finish at 10-under-par and collect his fourth main amateur title in twelve months after earlier securing the Riversdale Cup, Portsea Open and Victorian Amateur.

Daniel Nisbet showed promising form to finish at 5-under-par and in outright second.

Royal Melbourne again provided the perfect test with just sixteen of the 54 invited players breaking or scoring par during the final round. Just five players bettered par for the four round tournament. 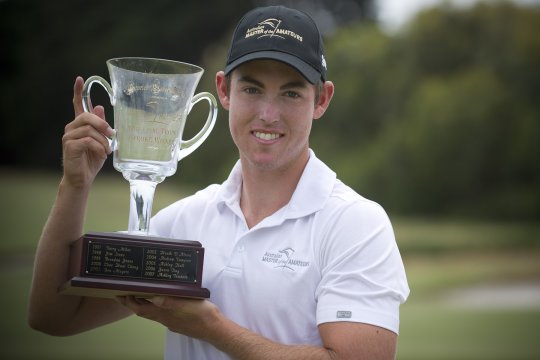 Nathan Holman, winner of the 2012 Australian Master of the Amateurs at Royal Melbourne. (Photo: Anthony Powter)

“It was tough going out there especially with the greens,” said Holman who jumped into the world’s top-50 following today’s victory.

“I managed to hold together four solid rounds, which is something that I’ve struggled to do lately. This victory against the class of the field that played here is something special and it is a great feeling to be heading into the next couple of events with this confidence.”

Holman certainly did not have it all his way during today’s final round.

Daniel Nisbet came out of the blocks firing to be 5-under-par through seven holes and at one stage had closed Holman’s five stroke overnight margin to two.

To Holman’s credit he responded to the Nisbet birdie barrage with three birdies of his own on the front nine.

When Nisbet imploded on the eighth green with some average chipping and putting only then to compound his woes with a wayward drive on the short par 4 10th at Royal Melbourne, Holman was back to a five stroke buffer.

By the eleventh hole the tournament was Holman’s for the taking.

Smart plays by Holman on the 335 metre 14th where Holman secured another birdie and on the 434 metre par 5 15th with another, effectively shut the gate on the tournament.

“I played the way I wanted to play,” remarked Holman.

“Royal Melbourne is not a course that you can simply thrash it out there. You need to think and you need to keep the ball below the holes. The greens today were extremely difficult and you didn’t want to be facing any ten footers otherwise three putts became a real possibility.”

Keeping in perspective the quality of this field, which included the US Amateur, US Public Links and Australian Amateur champions, members of the German and UK Elite squads, Holman’s victory is significant.

With the Australian Amateur championship being held at his home club (Woodlands Golf Club), Holman will no doubt enter the tournament with a high level of confidence.

A quality player, Holman is a worthy champion for arguably Australia’s most prestigious event and with starts guaranteed at the Players Amateur, British Amateur, Canadian Amateur, the stage is set for Holman to make his mark on the amateur international stage.