It was the second time in as many years the tournament was decided beyond regulation play but unlike last year’s marathon seven-hole playoff between Greg Chalmers, Adam Scott and Wade Ormsby, only one hole was needed. 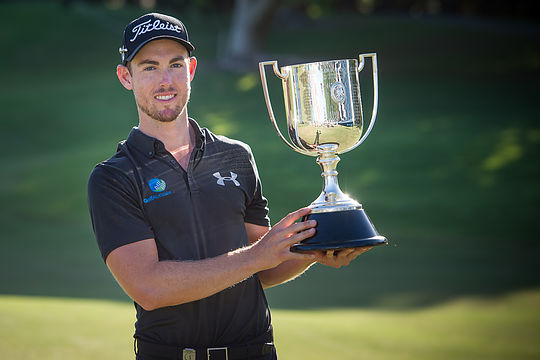 Holman was able to hold off a stern challenges from Frittelli and Varner III to secure a victory that sees the 24-year-old exempt on the European Tour for the next two and a half years and a pay cheque for more than $330,000.

“To be honest I really had not thought about it,” said Holman following his victory.

“I’ve been close before and to finally get a win across the line is fantastic. I’ve been working hard and I feel this is a win that I deserved. To get the Australian Order of Merit and to be going to The Open is also fantastic.”

Holman, Varner and Frittelli all finished on even par for the tournament on a newly designed back nine layout that punished the field all week.

Holman started the day at one-under, two shots behind Varner and South African duo of Frittelli and Zander Lombard. A disastrous double-bogey on the opening hole was not the start Holman was after but he followed with three birdies on the 9th, 12th and 15th as he climbed the leaderboard to mount his challenge.

By the 16th, Holman looked poised to win but lipped out a make-able birdie putt which would have given him a two shot buffer over the field with two to play. A bogey on the par 4 17th cut his lead to a single shot and he left a chip on the 18th hole well short of the pin.

He missed the par putt to finish the tournament at even par and open the door to a play-off.

“Yes, I was nervous,” said Holman.

“But I was able to close it out. Maybe not in the fashion that I wanted, but I held in there, kept patient and focussed to keep the game going. It wasn’t easy out there and to finally get the result was a relief.”

Australian young gun Cameron Smith made a strong push and at one stage shared the lead with Varner, but came undone with three bogeys on his inward nine to finish with a 73.

Only six players of 71 managed to complete their fourth rounds below par.