American Max Homa, who won the NCAA title at California State in 2013, won for the first time in his 68th start as a professional on Sunday taking out the Wells Fargo Championship.

The victory gets him into the PGA Championship in two weeks’ time at Bethpage Black and the Masters next April.

Homa finished at 15-under to secure a three shot victory over Joel Dahmen, with Justin Rose in third position at 11-under-par.

The win has Homa completing a full circle after a number of years struggling on tour.

In 2017, he missed 15 of 17 cuts and made less than US$20,000. He also just scrapped through the Web.com Tour Finals last season, then earned back his PGA Tour card by finishing 15th on the Finals money list.

Homa began the final round as one of three co-leaders, and through six holes he found himself trailing Dahmen. But the middle of his round proved to be the difference, as the 28-year-old made three birdies in a five-hole stretch to take the lead before ultimately building a four-shot lead and his maiden victory proving to himself, and others, that he has what it takes to compete at the highest level.

“I had some serious scar tissue from out here,” said Homa. “It means a lot to me to be able to do this under pressure, and the job security is great. I’ve never had that before.”

“I went to some low, low places. Very glad I found a ladder and started climbing upwards because it was dark down there. Nobody knew who I was. I felt like I was on an island and it was borderline embarrassing at times, but it’s not anymore.” 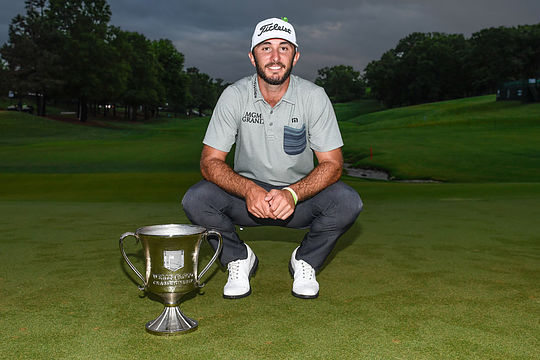 Tournament favourite Rory McIIroy started the day two shots back yet never got his game into action starting with a careless eagle attempt into a par on No. 7 with three putts and then stumbled to a double on the 10th after requiring three chips from greenside.

McIlroy signed for a disappointing 2-over 73, one that dropped him to 7-under and a tie for 8th on a day when he was poised to add a third Quail Hollow title.

Jason Day had gained momentum after the opening two rounds but a third round of 74 cost him any chance of defending his title but finished the leading Australian in 24th position. No player has successfully defended his title since the event’s inception in 2003.