American Max Homa kept the pressure on England’s Danny Willett right up to the final hole in taking out the Fortinet Championship in Napa, California.

The Englishman looked to be in the box seat to take out the PGA Tour season opener having reached the par 5 18th in regulation and with a 1 shot lead over Homa, who missed the green.

Homa battled Willett, the 2016 Masters champion all day in the final round. Trailing by a shot going to the final hole, Homa needed to make his chip shot from off the green to apply some pressure on Willett, who only needed to sink a one-metre putt for victory.

Homa then produced a wonderful chip-in from nearly 20 metres for a birdie. Willett then pushed his first putt well past the hole and missed the return to hand Homa his fifth PGA Tour win and second Fortinet title. Homa closed with a four-under 66 for a total of 16 under par.

“That was crazy. I still don’t really know what happened,” said Homa. “Just kind of one of those weekends you just had to hang around.”

“Today I hit it well, kept it around the hole where it needed to be, I just couldn’t get the ball to go to its home. On 18 it decided to go home quickly, so that was quite a nice bonus.”

Homa now has three wins in the past 12 months. The 31-year-old has won this tournament twice, the last occasion before Sunday’s victory being in 2021 where he shot 19-under to win by a stroke over Maverick McNealy. 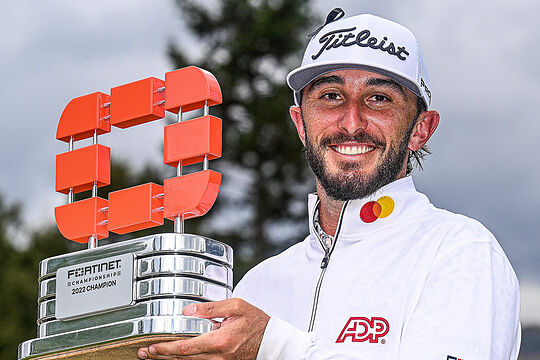 Sunday’s victory brings his career wins as a professional to seven, five on the PGA Tour and two on the Web.com Tour. Homa’s best result in a major was a share of 13th at this year’s PGA Championship.

Taylor Montgomery produced the round of the day, eight birdies and no bogeys in a 64 to finish third on 13 under.

Overnight leader Justin Lower, playing in the final group with Willett and Homa, shot 73 to finish alongside South Korea’s Byeong Hun An a shot behind Montgomery.

On debut, Harrison Endycott finished the best of the Australians in a share of 12th position, followed by Cameron Percy in 25th with Aaron Baddeley in a share of 36th.

Cam Davis and Jason Day missed the 2-under cut.