The victory was Homa’s second on the PGA Tour and even more special given he grew up in the area attending the University of California where as a Senior he won the Pac-12 Championship at the Los Angeles Country Club.

Sunday’s victory saw Homa pocket a winner’s cheque of US$1,674,000 and a three-year PGA Tour exemption.

With the playoff starting on the famed 10th hole at Riviera, Finau drove his ball to the left of the green, Homa’s tee shot ended up against a tree and looked as if he had an impossible shot but he managed to get a club to the ball and save par to extend the playoff.

On the par-3 hole, Finau pulled his ball in the left greenside bunker, while Homa hit the green, his ball stopping about 4 metres away from the hole. Homa missed his birdie attempt but then Finau, facing a nearly identical putt, also missed, handing Homa the win.

“I think young me would have had a hard time dreaming this one,” said Homa, 30. 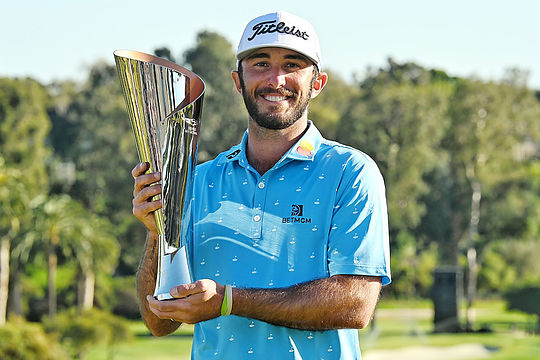 “We grew up idolising Riviera Country Club, idolising the golf tournament. It was so fun to watch from the other side of the ropes. Even just playing, every day I come here is kind of a pinch-me moment. So when I saw my name up at the top of the leaderboard, it hit me. It feels like it just can’t be topped just for me.”

The victory allowed Homa to crack the top 50 in the world for the first time, making him eligible for the World Golf Championships-Workday Championship at The Concession this week and get him back to the Masters.

What’s In The Bag – Max Homa

Finau was unable to break his infamous winless drought, now making it 37 top-10, 21 top-five and 8 runner-up finishes without a win since the 2017-18 season.

Cameron Smith finished the best of the Australians in a share of 4th position, three shots behind Homa while Matt Jones recorded a top-10 result finishing at 6-under-par for a share of 8th position.

Marc Leishman moved up seventeen places with a closing 68 to finish in a share of 32nd position and Adam Scott was another final day mover climbing 24 places with a final round 66 to finish in a tie for 38th position at even par. The defending champ enjoyed a solid defence but will rue his third round 76, which cost him any chance of a repeat victory.

Cameron Davis finished at 1-over to share 43rd position to be the last of the Aussies to make the weekend.

Next up on the PGA Tour is the World Golf Championships-Workday Championship at The Concession Golf Club in Bradenton, Florida, starting this Thursday.