American Max Homa has taken out the Wells Fargo Championship on the PGA Tour with a two stroke victory over England’s Matt Fitzpatrick.

Homa finished at 8-under-par for his fourth PGA Tour victory overall and third in the last 15 months. It was also his second Wells Fargo title after winning in 2019. Homa is one of just seven players on the PGA Tour with three victories since the start of the 2020 season.

“It feels good,” said Homa. “It’s a special day for me. I just feel like life is good and I’m playing some good golf. I’m coming into my own and starting to believe in myself and that’s all I can ask for.”

“I care about nothing more than making that Presidents Cup team,” added Homa. “I’m really hoping Captain Davis Love III was watching today or at least somebody messaged him about it.”

Homa’s previous wins include the Fortinet Championship last September, the Genesis Invitational in February 2021 where he won in a play-off against Tony Finau and the 2019 Well Fargo Championship.

The wins add to this two Web.com Tour wins at the 2014 BMW Charity Pro-Am and the 2016 Rust-Oleum Championship. As an amateur he played college golf at University of California, Berkeley and played at the 2013 US Open, and won the individual 2013 NCAA Division I Men’s Golf Championship. He was selected for the 2013 Walker Cup squad before turning professional after the event. 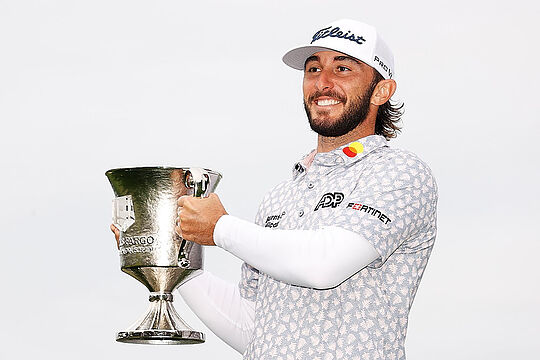 Homa’s best finish in a major was at this year’s Masters Tournament where he shared 48th position.

Off the course, Homa is well known on social media, where he chats about everything from airport travel, caddies, tee shot issues, soccer, shopping and socialising. He also co-hosts the ‘Get a Grip’ podcast with Shane Bacon which has attracted a considerable following.

Jason Day who blasted into contention with opening rounds of 63-67 to take the midway lead, finished in a share of 15th to be the best of the Australians, a third round 79 hurting his chances of another PGA Tour title.