American Max Homa won his third PGA Tour title on Sunday at the Fortinet Championship with an impressive come-from-behind final round 65 for a one stroke victory in the tour’s season opening championship.

Homa pipped fellow American Maverick McNealy, who closed with a 68. It’s Homa’s second title this year after he outlasted Tony Finau in a playoff back in February to win the Genesis Invitational.

Playing in the pairing just in front of McNealy, Homa birdied three of the last six holes to grab the victory.

“It was awesome to get this victory,” said Homa.

“I was nervous, but a good kind of nervousness. I played really controlled golf and felt confident out there today. Everything felt alright today…I just let the birdies come and not force anything and was able to pick up a few shots and then just coming in did not need to go nuts, but play really solid golf.” 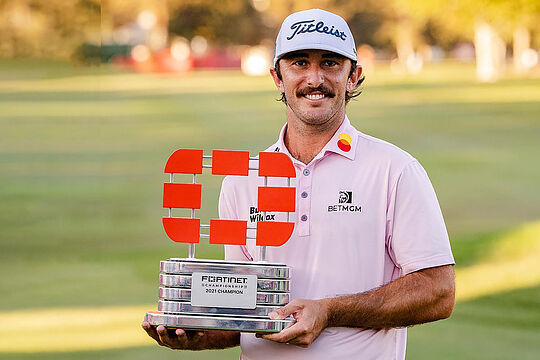 The win has given Homa plenty of self-belief.

“I’ve work really hard and pride myself on it. I know my game and I’ve struggled a little with my confidence, but I know what I need to work for and see that I can do it and believing in myself and that I can compete here.”

Homa joined the PGA Tour in 2014 and his first victory came in 2019 at the Wells Fargo Championship which added to his two earlier Korn Ferry titles. A member of the 2013 US Walker Cup team, Homa played collegiate golf for the University of California-Berkeley.

Marc Leishman finished the best of the Australians in a share of 4th position, a final round of 65 moving him up twenty-two places to finish at 15-under.

Lucas Herbert, playing in his maiden tournament as a full PGA Tour player missed the cut by two shots after rounds of 71-72, as did Brett Drewitt who was 2-over after his opening two rounds.