Overwhelming home favourite Rory McIlroy intends not getting carried away and is intent on ‘looking around and smell the roses’ ahead of Thusday’s start to the 148th Open Championship.

McIlroy, 30, spent the morning getting drenched on the practice range ahead of facing the media at 12.30pm. 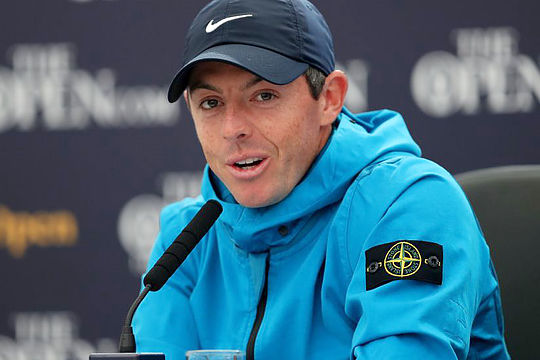 The current World No. 3 faced the media and while the theme of many was focussed on his knowledge of the course, and having shot a 61 as a 16-year in 2005, it was the very last question that brought out the ‘roses’.

“I’ve always felt I’ve played my best golf when I’ve been totally relaxed and loose. And maybe that environment is what I need,” he said.

“I’m not saying that that’s the way I’m going to approach it. I’m still going to try to go out and shoot good scores and concentrate and do all the right things.”

“But at the same time, I can’t just put the blinkers on and pretend that’s not all going on. I still have to — one of my sort of mantras this week is: Look around and smell the roses.

“And I think if you can look at the bigger picture and you can see that, it sort of takes a little bit of the pressure off. I still want to play well and concentrate and do all the right things, but at the same time just having that perspective might just make me relax a little bit more.”

Another real asset to McIlroy this week and someone who will play a key role to his title ambitions is his right-hand man and caddie, Harry Diamond, who’s no stranger to Royal Portrush having got to the final of the North of Ireland Championship here in 2011.

A plus handicapper in his own right, Diamond won the coveted West of Ireland championship at Rosses Point in 2012 and if it wasn’t for his entrepreneurial expertise, perhaps he would have joined his best friend down the professional path too.

No doubt his business acumen translates to the role of bag man, however. Forecasting figures, risk assessment, exploring any intricate detail that could gain an advantage over the opposition – Diamond is believed to shine brightest in this sphere.

So, far from Rory’s ‘yes’ man, McIlroy insists that his ears will be pricked more than ever in welcoming his caddie’s local insights, as the ‘Diamond Partnership’ plots its way around the Dunluce Links with the Claret Jug in mind.

“I think that’s one of the things people don’t realise, Harry has played more rounds of golf on this golf course than I have, and definitely more competitive rounds,” said McIlroy.

“He reached the final of the North a few years ago. So, he’s got a lot of – he’s just as comfortable on this golf course as I am. So that is a big help this week.”

“Not that I don’t let him have any say any other weeks, but I think with his experience around here, my ear will be a little sharper to what he has to say.”

One thing that was plain for all to see in observing McIlroy on Wednesday afternoon was his relaxed demeanour. Far from looking overawed by the occasion, McIlroy looked like he belonged, and perhaps more pertinently, looked like he realised it too.