Purcell accounted for Aussie Nathan Barbieri on the first extra hole, after Barbieri fought back from four down with 10 holes to play to force the playoff. Purcell became the first ever Irishman to win the Australian Amateur Championship. 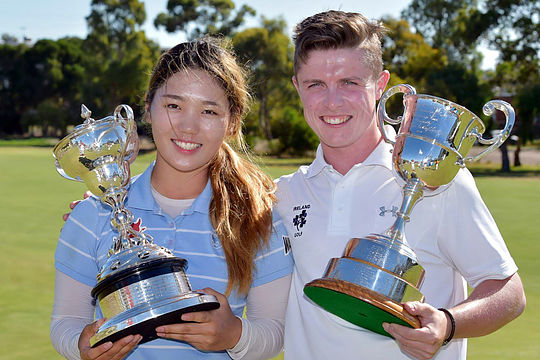 “The last few holes were a bit edgy, but to cap it off on the playoff hole was nice,” said Purcell, a former national champion in tennis in addition to being a national golfer.

“Funnily enough I was more nervous on the first tee this morning than I was going down the playoff hole – I felt quite comfortable still because I’d been playing well all week.”

The victory is Purcell’s first international title having finished runner up at the 2018 Scottish Open Amateur and the Dublin based golfer had also reached the semi-finals of the 2018 British Amateur championship.

Hong’s victory made it three Korean winners of the women’s Australian Amateur in the past four years in a sign of domination from the country in our national title. Hong accounted for Japan’s Tsubasa Kajitani, 3&2.

The best performance from an Australian was Stephanie Bunque, who made it through to the semi-final before Hong ended her championship 1-up.