She’s almost an Aussie these days.

So Norway’s Marianne Skarpnord was a popular winner of the Pacific Bay Resort Australian Ladies Classic at Bonville Golf Resort just outside of Coffs Harbour at the weekend. 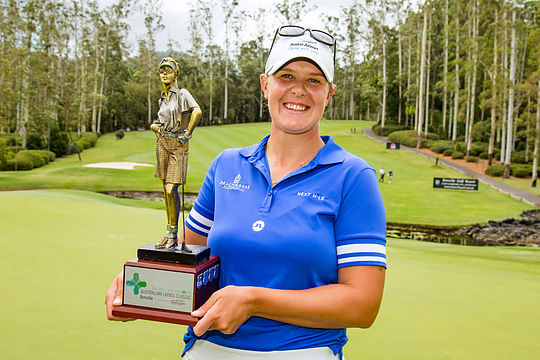 For those that don’t know Skarpnord, she is the partner of veteran Aussie professional Richard Green.

So she’s virtually an adopted Australian and she showed the sort of grit and determination which would make any Aussie proud as she ground out a fabulous two shot victory on Sunday.

Her final round was highlighted by a massive tee-shot at the final hole to give her a look at an eagle before a tap-in birdie sealed a two-shot victory.

It had been an exciting final day with the lead changing hands several times.

At the start of the day, Swede Madelene Sagstrom clung to a one-shot lead over the trio of Aussie Hannah Green, Spaniard Nuria Itturios and Skarpnord, with Sydney amateur Doey Choi a further shot back.

Sagstrom promptly made a double-bogey at the long par-3 third hole and suddenly found herself in a six-way tie for the lead.

Skarpnord made the first break away from the pack at with a birdie on the seventh.

West Australian Hannah Green (no relation to Richard) had her hopes of a maiden professional title on home soil dashed with a double-bogey at the seventh to fall four shots behind.

And with players getting in and out of contention all afternoon it eventually came down to a three-horse race with Skarpnord, Choi and Iturrios.

Skarpnord then holed a terrific putt for a birdie two at the 17th while Itturios was driving into trouble on the 18th hole.

That gave the Norwegian a one shot lead on the 18th tee. The 33-year-old then smashed probably the longest drive of the week down the par-five 18th hole, meaning she would be left with just a mid-iron to the green.

While Itturios did well to salvage her par at the last, it was time for 2015 Vic Open champion and three-time winner on the LET to stand up and produce under pressure, safely finding the green in two with an eagle putt.

With Skarpnord’s playing partner Green making a birdie for equal second, Skarpnord lipped out her effort from long range leaving her a tap-in for the victory.