The 18-year-old kicked off his Sunday round, two shots behind overnight leader Brody Martin, and by the turn the 25-year-old Martin was still in control. 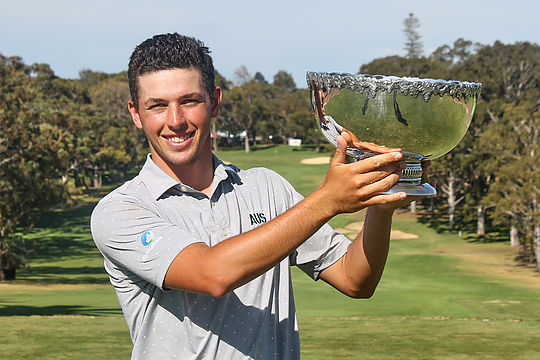 However, Hopewell had other ideas, firing off the first of six birdies on the back nine at the 10th hole including three in a row from the 16th hole to snatch the title by a single stroke.

Martin couldn’t get anything going on the way home with a lone birdie matched by two costly bogeys denying him victory.

“It’s a great stepping stone,” said Hopewell, who was runner-up at last year’s WA Open behind Michael Sim and winner of the 2020 Tasmanian Open and Western Australian Amateur.

“It reinforces the confidence within my game, in myself. It doesn’t change anything with my timeline of turning pro but this is a good stepping stone. It’s one I wanted to win.”

“Last year I had a two-shot lead going into the last round and it was a bit of a different mindset. I had to hold on and play solid golf but this year I was two behind and thought I had to give it my all, leave nothing in the tank.”

“It was more of an aggressive mindset and it paid off.”

Hopewell now joins the likes of previous WA Open winners Zach Murray, who plays on the European Tour, and Curtis Luck, who currently plies his trade on the Korn Ferry Tour along with WA legends Terry Gale and Stephen Leaney.

With last week’s cancellation of all major summer events in Australia, this Friday’s NT PGA will be the final event of the year before the Gippsland Super 6 tees off in late January 2021.