Horschel carded an even-par 72 on the final day, which was all he needed thanks to the sizeable cushion he had before play began. A seven under-par 65 on Saturday put him five shots ahead of Aaron Wise and Aussie Cameron Smith.

At 13-under-par total, Horschel finished four shots ahead of fellow countryman Wise in second place and moves to a career-high 11th in the Official World Golf Rankings. Horschel also picks up a winner’s prize of US$2.16 million, the largest of his career, and a three-year tour exemption.

“Having a five-shot lead, knowing it was mine to win, I really wanted to get the monkey off my back,” said Horschel.

It was Horschel’s third PGA Tour victory in the last 15 months. Last year he won the WGC-Dell Technologies Match Play and the BMW PGA Championship at Wentworth on the DP World Tour.

The 2014 FedEx Cup champion entered The Memorial with a string of solid results. At the Zurich Classic of New Orleans, he finished runner-up with partner Sam Burns, recording his third top-five in five starts at the event since the team format was introduced in 2017.

At the Arnold Palmer Invitational he held a share of the 54-hole lead and went on to finish in a share of second place, his eighth career runner-up on the PGA Tour. Horschel also held the lead at the Famers Insurance Open before finishing in a share of 11th. 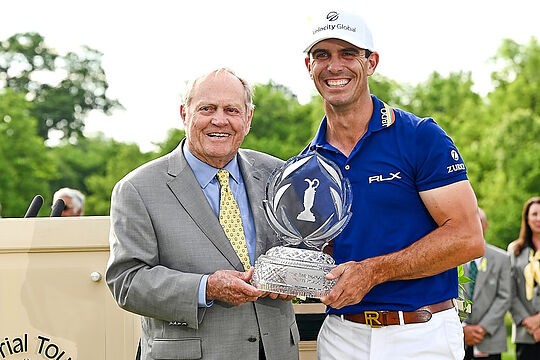 For Cameron Smith, it was case of what could have been. The Queenslander had earlier grabbed the 36-hole lead but thanks to a third-round 72 began five shots behind the leaders on the final day.

Smith got off to a horror start with a pair of double bogeys for a 42 on the front nine and from there could not recover to post a final round 77 and fall into a share of 13th position and the best of the Australians.

Jason Day also experienced his share of final day troubles with a 75 to slip into 31st place, with Lucas Herbert in a share of 48th and Cam Davis (T53).

Adam Scott was the last of the Aussies on the weekend with an uncharacteristic final round 80 seeing him fall away to 67th.

Jones and Morgan now head to England for this week’s $25 million LIV Invitational Series at Centurion Club in London, which is offering a record first prize pool of $4 million.