Billy Horschel won on the PGA Tour for the first time in nearly three years on Sunday when he took the Byron Nelson Championship in a playoff over Jason Day for the fourth PGA Tour title in his career.

Horschel shot a 69 to Day’s 68 to get into the playoff as the pair finished at 12-under and watched on as Day missed a 4-foot putt for par that would have sent the tournament to a second playoff hole.

The victory was the first for Horschel since he went on a stellar run in the 2014 FedExCup Playoffs and took home the Tour Championship. Since that time, Horschel has just nine top 10s in 63 events and came into this week’s Nelson having missed his last four cuts in a row.

“[I was] grateful that I was playing a game I love,” said Horschel. “Probably sometimes take it for granted, but I put so much pressure on myself of last four weeks. I was in a peaceful place all week. Happy to be here and happy to compete, and it’s nice to walk away with a trophy.” 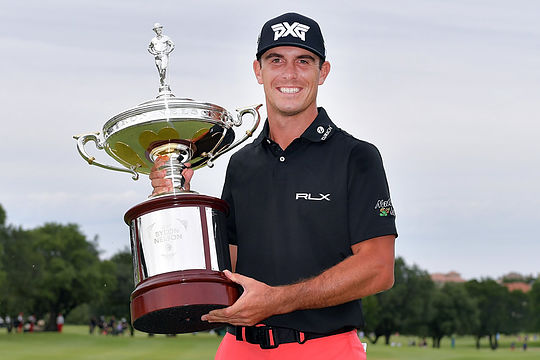 It looked like Horschel was beginning to fade during the early stages of the back nine as he posted back-to-back bogeys starting at No. 12, but he bounced back with an outstanding birdie at No. 14 to get back level.

Day responded with a miraculous birdie of his own. The 29-year-old Aussie found the deep rough off the tee and his approach came up well short of the green. He faced a long chip from a downslope across a bunker and delivered a perfect shot to save par which ultimately proceeded along with the two horse race for the title.

Both made par on the 17th before leaving birdie chances short on the 18th to set up the play-off. Earlier Day had a one-shot lead with three holes to play.

Day’s playoff loss, while disappointing, moved him up to 39th in the FedExCup race. He also reclaimed his No. 3 spot in the Official World Golf Ranking, ahead of Hideki Matsuyama and narrowly missed overtaking Rory McIlroy.

The result was Day’s best finish this season having suffered a back injury last year, and he has only managed one top-10 finish since.

“I’ve only had one top-10 up until this point,” Day said of his season. “To be able to play the way I did today, I played some good, solid golf.”

“Obviously it’s a little disappointing but it’s not the first tournament I’m going to lose. I’ve lost plenty of other ones and I’ll lose plenty more in the future.”

“But what happened today is what you’ve got to do if you want to win. You’ve got to take risks. If you don’t take the risks, you’ll never win.”

Marc Leishman was the next best Aussie closing with an impressive 67 to finish in a tie for 13th position along with world number 1 Dustin Johnson.

Rod Pampling also made the cut but a closing round 75 saw him drop 23 places to finish in a tie for 59th position. Geoff Ogilvy and Greg Chalmers also made the weekend.