Billy Horschel has won his first World Golf Championship title after taking out the WGC-Dell Technologies Match Play with a 2&1 victory over Scottie Scheffler in the final at Austin Country Club in Texas.

The win is Horschel’s sixth PGA Tour title and the most significant of his career.

Horschel, the 32nd seed, had beaten Frenchman Victor Perez 3&2 in the morning semi-finals, to set up the clash with 30th-seed Scheffler, who had defeated Matt Kuchar 1up in the last four.

Kuchar continued his return to form as he secured third place by beating Perez 2&1 in the play-off for third and fourth.

Horschel made only one birdie in the championship match, chipping in from 25 metres on the fifth hole, and played solid match-play tactics to put the pressure on the 24-year-old Scheffler. 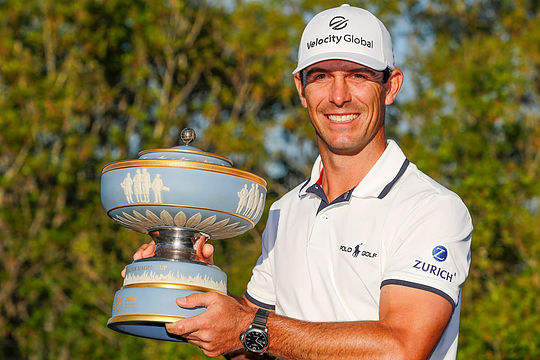 “It was one of those days where I didn’t play very good,” said Horschel. “I was just grinding it out.”

Scheffler was the first to make a move when Horschel hit his tee shot into bushes on the 2nd hole and needed to take a penalty stroke before making bogey. Scheffler managed to save par at the sixth and tie the hole, but faulted at the seventh, giving Horschel his first lead of the match, at 1-up.

Another Scheffler bogey at the ninth put Horschel 2up at the turn.

What’s In The Bag: Billy Horschel

After halving the 15th and 16th holes in par, Scheffler needed to make a 2 metre putt for birdie at the par-3 17th to stay keep in the match. He missed, giving Horschel his first WGC title.

“And I just haven’t done a few things correct in certain matches in previous years to be able to get to the point I am now and so I think I’m learning from those. I’m hoping I am.”

The victory moved Horschel within reach of another FedExCup title as he climbed to seventh in the season standings and back into the top-20 in the world rankings (at 17th) for the first time since July 2015.