American Billy Horschel claimed the BMW Championship at Cherry Hills Country Club with a final round one-under 69 leaving him two clear at the top at 14-under from Bubba Watson.

Horschel entered the final round with a three-shot lead and recorded his second PGA Tour title after winning the 2013 Zurich Classic and in the process set himself up nicely for the season ending $10 million prize purse on offer this week in Atlanta at the Tour Championship. 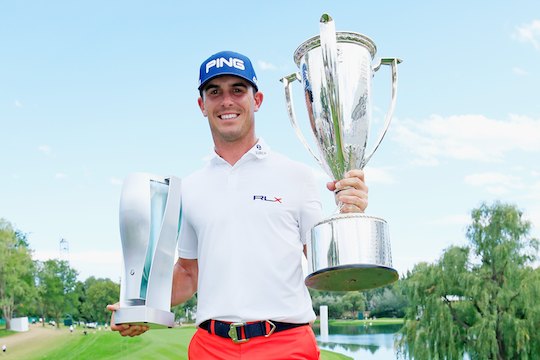 “If I were a betting man, I’d put some money on me,” said Horschel, who made $1.44 million for his second career victory and moved to number two in the FedEx Cup standings.

Horschel was runner-up last week at the Deutsche Bank Championship to Chris Kirk in Boston, with Kirk leading the standings heading into this week’s season finale.

“It’s being a tough year and I’m so ecstatic to get a win,” said Horschel.

“I battled all day to get this victory and my putter saved me out there. Inside 10 feet I’m a good putter, my stats support that and it showed today.”

Four putts from four feet saw the world number one, Rory McIIroy, crash out of contention on Saturday on the par-3 12th, only for McIIroy to do the same on Sunday where he four-putted from 19 feet on the same hole.

“Two four-putts on the same green? It’s not my worst,” McIlroy said. “I have five-putted before.”

A final-round 66 left McIIroy tied for eighth for the tournament and 4th on the Fed Ex Cup standings.

Morgan Hoffman fired a final round 63 to claim third position on Sunday and in the process pipped Stuart Appleby of a dream return to the majors with Appleby missing an 18-foot birdie attempt on his last hole to end up in 31st on the FedEx Cup standings, one place short of gaining exemptions to the majors.

The top-30 season long points getters qualify for the Tour Championship at East Lake starting Thursday. As an additional bonus the top-30 have also gain exemptions into the 2015 Masters, plus the US and British Opens next year.

World number two Adam Scott was the best of the Australians in Denver at 8-under-par in a tie for eighth position, with John Senden finishing in a tie for 23rd position at 3-under.

Jason Day finished the top-ranked Aussies in the FedEx Cup standings at 10th, but is yet to be cleared of a back injury with the world number six uncertain whether he’ll be teeing it up this Thursday at East Lake.

Ogilvy finished in a tie for 36th position on the weekend to set a return date to the Masters next year for the first time since 2011 which has the former US Open champion presently at 25th in the standings.

Marc Leishman, Matt Jones and Steven Bowditch all missed the top-30, seeing their US season coming to an end.