American Billy Horschel finished in style with a birdie on the final hole to win his second European Tour title at the 2021 BMW PGA Championship at Wentworth Golf Club in England.

Horschel carded a final round 65 to finish on 19-under to beat Thailand’s Kiradech Aphibarnrat, home favourite Laurie Canter and Welshman Jamie Donaldson by a shot.

Earlier this season, Horschel claimed a World Golf Championships title and Sunday’s victory at Wentworth moves him to second on the Race to Dubai Rankings. He becomes the first American to win a Rolex Series event and just the second to win the BMW PGA Championship after Arnold Palmer in 1975.

“I am speechless really, and that’s rare,” said Horschel. “To win this event means a lot, this is like the Players Championship. I knew if I could birdie one of the last three holes I could win and one was enough. Adding my name to Arnold Palmer, that’s legendary stuff. That guy, if it wasn’t for him, we wouldn’t have this modern era of golf to play in front of thousands of fans and big sponsors.”

Horschel, a six-time PGA Tour winner, was one of the American golfers who just missed out on qualifying for Steve Stricker’s USA Ryder Cup team, making Sunday’s victory even more sweeter.

The 34-year-old was on fire early in Sunday’s final round, posting three birdies and no bogeys on the opening nine holes. He then closed out nicely, avoiding any bogeys as well as carding four more birdies to get his stroke advantage on the field. 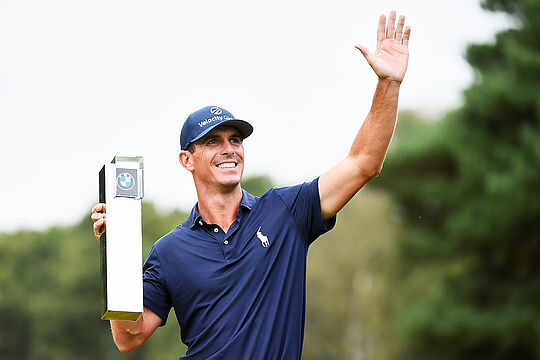 Horschel turned professional in 2009 after an impressive amateur career as a four-time All-American in college and SEC player of the year in 2007. He earned his PGA Tour card in 2013 and began the season making the cut in every tournament entered. His first career win on the PGA Tour came at the 2013 Zurich Classic of New Orleans.

With Sunday’s win he moves to number two in the Race to Dubai rankings with six events remaining before wrapping up the season at the $9 million DP World Tour Championship in Dubai on November 18.

Adam Scott, who began the tournament with a 65, was the best of the Australians finishing in a share of 14th position at 13-under-par. Wade Ormsby shared 49th position at 5-under-par to round out the Aussies making the weekend.

Scott Hend and Min Woo Lee missed the cut with Lee remaining the highest ranked Australian in the Race to Dubai, currently sitting 10th. Jason Scrivener is the next best Aussie at 16th followed by Lucas Herbert at 19th.

The European Tour now takes a break for a week for most players with the Ryder Cup taking place in the US before the Alfred Dunhill Links tees off on September 30.