Billy Horschel and Scott Piercy played bogey-free Sunday golf in the alternate-shot format to win the Zurich Classic on the PGA Tour by a stroke over Jason Dufner and Pat Perez.

The victory was Horschel’s fifth and Piercy’s fourth PGA Tour win. They each earned US$1.04 million, however, the team event does count toward their world ranking.

“It was great to play with Scott,” said Horschel. “Our games match up well. We are really good ball-strikers. We think the same way…I don’t have to worry about him making a bad decision.”

Horschel also won the 2013 Zurich Classic when it was a PGA Tour event with traditional single-golfer scoring. This is the second year of the event’s unique team format, where golfers partner up and shoot best ball on Thursday and Saturday, combined with alternate-shot golf on Friday and Sunday.

Horschel and Piercy began the day, three shots back but immediately surged into contention with birdies on the first two holes before posting a 22-under-par total.

The duo then cemented their lead with birdies on the 10th and 11th holes. They followed that with seven straight pars. Playing in the same group as Dufner and Perez, who trailed by a stroke for the final seven holes, Horschel and Piercy paired wonderfully nailing one shot after another to close with a bogey-free 5-under 67 in alternate shot play.

After Horschel narrowly missed a 10 metre birdie putt on 18, Dufner stood over a 8 metre foot putt to force a play-off but left it short. 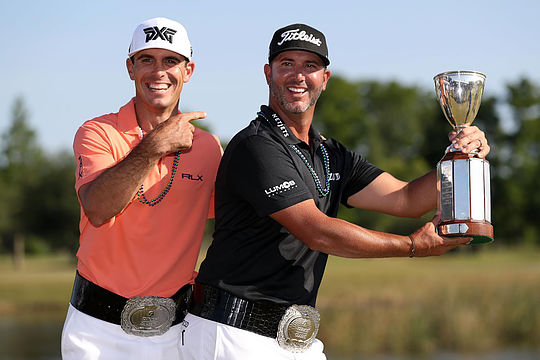 The team of Louis Oosthuizen and Charl Schwartzel finished third at 20-under-par. Tied for fourth at 19-under were the teams of Tommy Fleetwood and Chris Paisley, and Brice Garnett and Chesson Hadley.

Greg Chalmers and Cameron Percy carded a three-under 69 on Sunday to finish at 16-under and in a tie for 10th to be the best of the Australians.

Matt Jones and his American teammate Chad Campbell had a 71 to finish on 14-under and tied for 19th, while Jason Day and Ryan Ruffels closed with a 74 for a total of 9-under.

If there were any questions as to the event’s format and future, they were put to bed with Zurich Insurance announcing it has renewed its title sponsorship of the Zurich Classic of New Orleans until 2026.

The PGA Tour now heads to Charlotte, North Carolina for the Wells Fargo Championship at the Quail Hollow Club where Tiger Woods will return to action for the first time since the Masters.

Brian Harman is the defending champion, and the field is littered with top players before the Players Championship the following week in Ponte Vedra Beach.