Did you notice any houses in the distance while watching Brooks Koepka romp home in the US Open at Erin Hills in Wisconsin last weekend?

Well, you shouldn’t have. That’s because the man who built Erin Hills spent a fortune, well, about $5.5m just to buy up neighbouring properties to ensure golfers wouldn’t see a house in the distance while they were there playing golf. 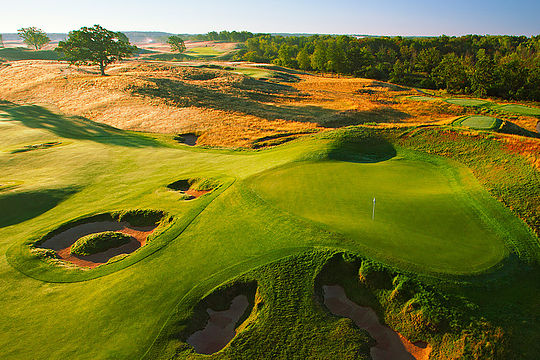 To be honest, apart from the clubhouse and a massive church-like building in the distance on some holes, I didn’t notice too many houses popping into the picture?

Which is exactly what Bob Lang would have wanted at the 11-year-old layout.

But it cost him dearly…it has been reported that Lang lost as much as $16m in building the US Open venue.

He would eventually pour another $US15 million into the dream, including the inheritance of his three children, before eventually being forced to sell the course for $US10.5 million in 2009 because he “nearly went broke” and “was out of money.”

After Erin Hills hosted the 2008 US Women’s Amateur Public Links Championship, the USGA recommended several minor changes that would improve the course and might make it worthy of hosting a US Open.

Lang spent $3m building a new clubhouse, but it was his decision to buy up to 150 acres of land surrounding the course that cost him dearly.

“They had to be removed because, from my point of view, I wanted Erin Hills, when you played, you’d never see a house,” Lang told the Golf Channel.

No wonder it sent him broke.