Anthony Houston shot up to the top of the leaderboard to claim the first round lead at the Fiji International with a course record.

Firing 7-under 65, Houston has equalled the Natadola Bay Championship Golf Course record set by the man who designed the layout; Vijay Singh. 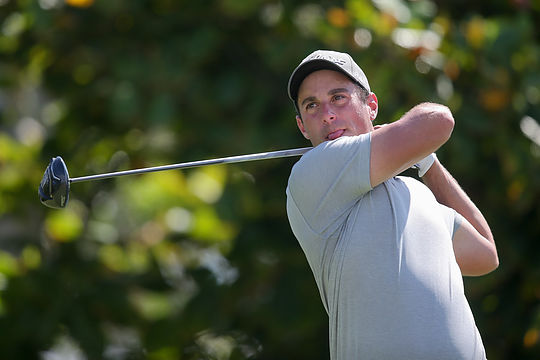 “I didn’t even know it was a course record until I got into the scorers hut and the lady told me, it was a good feeling,” said Houston, who won’t hold the title for long with re-design works on the course starting on Monday after the Fiji International.

“I think what they are going to be doing with the re-design is the right thing.”

“I think on days like today it’s fine but when the wind gets up a few of the greens become almost unplayable.”

Houston’s day was made even sweeter by a phone call home to his mum who is celebrating her birthday today.

“It’s actually mum’s birthday so I told her I would play as well as possible for her, so I didn’t want to drop any shots,” added Houston, who was happy to hold on after a great start to his round.

“I got off to a really good start, when it was windy as well; I was 5-under through seven holes.”

“I had a rough patch mid-round but I held it together and made a few birdies coming home.”

The Victorian, who won the ISPS HANDA PGA Tour of Australasia Qualifying School this year, sits one shot clear of West Australian Stephen Leaney and Jake Higginbottom thanks to a birdie on his final hole.

“It’s always nice to birdie the last, it was the highlight of my round,” added Houston.

Playing in the morning field of the first round, West Australian Stephen Leaney fired a bogey free 6-under 66.

“I didn’t do anything spectacular. I just did a lot of things well and made a couple of 20-footers and the other four birdies were only six and eight feet,” said Leaney.

Playing in the afternoon field, Jake Higginbottom matched Leaneys 66 to leave the pair tied second and one shot off the pace.

“I played well, very solid, I just hit one bad tee shot on 11 and ended up making a bogey,” said Higginbottom. “I finished with three straight birdies; it was a good round, nice and solid.”

Rounding out the top-10 are Ryan Haller (QLD) and Matthew Griffin (VIC) on 4-under the card.

Tournament drawcard Brandt Snedeker and Boo Weekley each fired rounds of 3-under 69 while local hero Vijay Singh finished on 2-under 70.