Houston, Lee come out on top at Dunes Medal

Anthony Houston outlasted Taylor MacDonald and Zach Murray to win The Dunes Medal on Friday in challenging conditions at the The Dunes Golf Links on Victoria’s Mornington Peninsula.

Houston fired rounds of 73-69-69-72 for a 5-under-total, and a shot clear of MacDonald and Murray to win his first main national event title. 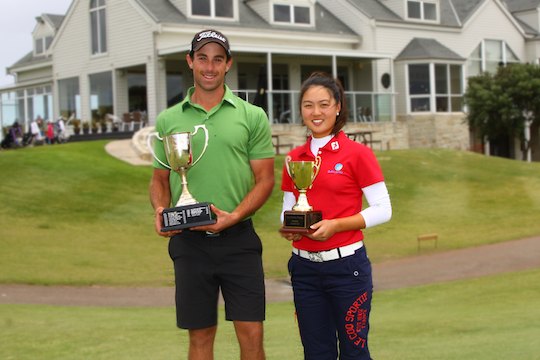 Anthony Houston and Minjee Lee with their 2013 Dunes Medal trophies

Starting the final round with a share of the lead along with MacDonald, Murray and Lukas Michel, Houston battled the wind swept links layout to record the day’s equal low round of even par 72.

A finalist at the 2012 Victorian Amateur, Houston’s previous best finish was runner-up at the 2012 Portsea Open Amateur with another runner-up finish this year at the Boroondara Cup.

The signs that Houston was on the verge of a significant win also were on display with a top-10 finish at the recent Keperra Bowl.

With only a single shot lead over Ling heading into the final round, her final round of 76 was enough to record her fourth amateur victory for this year.