Woods took 19 PGA Tour events between making his debut as an amateur at the 1992 Los Angeles Open to capturing his maiden victory as a rookie pro at the 1996 Las Vegas Open.

While McIlroy was competing in his 18th PGA Tour event when he shot a course record last day 62 to win his maiden Tour victory at the 2011 Quail Hollow Championship.

Hovland has accomplished the feat at the Puerto Rico Open in just the 17th event since his PGA Tour debut in late 2018 as an amateur in the Mayakoba Championship.

And the 22-year old Oslo-born Hovland also created further PGA Tour history by becoming the first Norwegian to win on golf’s richest stage posting a closing round 70 to capture the Puerto Rico Open. 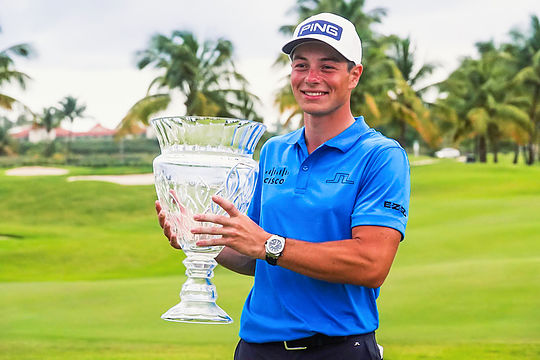 It was less than a year ago, as then the reigning U.S. Amateur champion, that Hovland became the first player in more than 20 years to claim the low amateur honours at both the Masters and U.S. Open.

He turned pro a week later at the Travelers Championship and then after back-to-back 13th place results at the Rocket Mortgage Open and 3M Open he finished fourth in the his season-ending Wyndham Championship to go within a whisker of securing PGA Tour full membership.

Now in becoming the first rookie to win on this year’s PGA Tour, Hovland earned a virtual three-year exemption right through to the end of the 2022 seaason while the ultra-talented Norwegian is now exempt into the Players and PGA Championship.

Unfortunately, the ‘smaller’ Puerto Rico Open prize purse did not qualify him for a second straight Masters invitation but at 102nd in the World Rankings ahead of competing in Puerto Rico and now expected to now jump inside the top-60, Hovland still has five weeks to get himself inside the top-50 by the Masters March 30th cut-off point.

He also gets to pocket just over a $US 1.2m first prize cheque.

Hovland stamped his presence early in Puerto Rico posting opening scores of 68 and 66 and then on day three, with Scot Martin Laird in the clubhouse and leading by a shot, Hovland birdied the last to grab the 54-hole lead.

Though Hovland brilliantly regrouped chipping in for eagle on the par-5 15th and racing in a 30-footer for birdie on the par-5 18th for a one-stroke victory over American Josh Teater (69).

“It feels crazy sitting here winning for a first time on the PGA Tour and on a day of a lot of ups-and-downs,” he said.

“I was just thinking today of trying to produce the lowest score I could and just get the job done. I haven’t really thought about the perks of my victory but it’s nice to get into some events that I was not yet exempt, so it looks as though it’s going to turn into good year.”

And in speaking of his maiden victory, Hovland singled out fellow Oslo-born Henry Bjornstad who was the first Norwegian until the appearance of Hovland to compete on the PGA Tour in first securing his card for the 2006 season.

“The first and only person to play out here was Henry Bjornstad,” Hovland said.

“I grew up kind of watching him play or following the scores online. So to kind of follow his footsteps and be able to win kind of the first tournament for Norway is really special.”

“I had a bunch of my friends and just normal people from back home paying attention, which is a lot more than I could ask for.”

Cameron Davis lead the Aussies on Sunday finishing in a tie for 27th at 10-under alongside Rhein Gibson.

Cameron Percy finished in a share of 44th place with John Senden in equal 64th.