Norway’s Viktor Hovland sank a four metre birdie putt at the final hole on Sunday to win the Mayakoba Classic by one stroke over American Aaron Wise.

Hovland, now ranked 15th in the world up from 26th last week, fired a six-under par 65 in the final round to complete 72 holes at Playa del Carmen, Mexico, at 20-under par. It was the second PGA Tour title for the 23-year-old from Oslo, who won back in February at the Puerto Rico Open.

The Norwegian also becomes just the fifth European player to earn multiple PGA Tour titles before turning 24, which is almost a year away in September 2021. It’s an esteemed list that includes the likes of Rory McIlroy (6), Seve Ballesteros (3), Sergio Garcia (3) and Jon Rahm (2).

Hovland had four birdies in his opening six holes and built a two-shot lead going into the back nine before Wise applied the pressure closing with an impressive 63. Some nervous moments for Hovland included at the 16th when his ball landed just short of the hazard before a superb birdie on the final hole sealed the deal.

What’s In The Bag: Viktor Hovland

“I was shaking there at the end,” said Hovland. “I thought I lost it after the second shot on 16. I made an awesome par there. I knew I had to make birdie on 18.”

Hovland turned professional following the 2019 US Open, and made his professional debut at the 2019 Travelers Championship. In August 2019, Hovland finished tied for second in the Albertsons Boise Open, part of the Korn Ferry Tour Finals. This finish secured him a PGA Tour card for the 2019–20 season. His best finish in a major was a share of 13th position at the 2020 US Open. 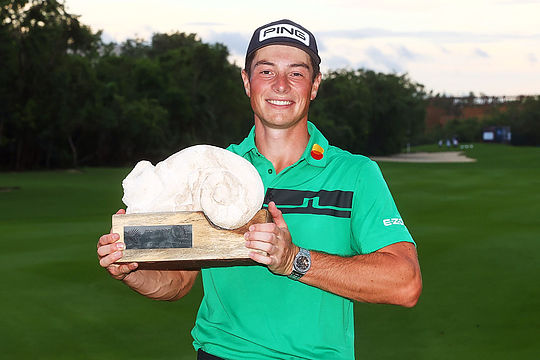 Adam Long (67) and Tom Hoge (69) tied for third at 17-under. Hoge holed a 8 metre birdie putt from the fringe on the 15th hole to get within one shot, but he three-putted on the 16th to end his chances. Long lost his chances on the 17th hole after flying the green to record a bogey.

It was not a good week for the Australians with none of them making the weekend. Aron Baddeley was the best of the bunch finishing even par and one shot off the 1-under cut mark. Rhein Gibson finished at 8-over, Marc Leishman at 9-over and Cameron Percy elected to withdraw after two rounds.

With no more official PGA Tour events remaining in 2020, Hovland and Streb round out the limited field headed to Maui for the Sentry Tournament of Champions when the event returns to The Plantation Course at Kapalua from Jan. 6-10.