Until this week, and in the 23rd hosting of the event, Woods was the only player to win the event two years in succession and with five victories in total.

That record is now out the window after the 25-year-old Hovland was handed the unique tiger trophy for a second year running here at the Albany course in the Bahamas.

However, Hovland had to do it the hard way. On the final hole and leading by two shots at 17-under, the Norwegian found water with his second shot before holing a superb bogey putt in a round of 71 to win by two shots from Masters champ, Scottie Scheffler.

Scheffler had found the fairway down the last but then ended up in a waste bunker right of the final green, leaving him a chip shot that hit the hole but bounced well past. From there the former World No.1 two-putted for a bogey ‘5’ finish and a 14-under tally.

It is the second year also in succession Hovland and Scheffler have finished one, two in the US$3m event.

But all credit goes to Hovland in capturing a seventh pro career success.

“It was friggin’ nerve-wracking out there as I was leading by five shots after the turn, and you’re never that comfortable,” he said. “I didn’t play all that great on the back nine but it was good enough to win.”

“I knew in playing that 6-iron second down the last from the side the of the bunker that it would go high, and I got a flyer so I figured if I could hit it pretty far right then I would be okay but I have been struggling with clubface shutting a little bit, so it went left but it was a good result in the end.” 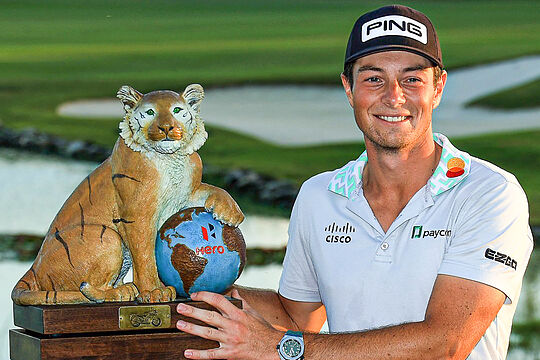 “Of course, you still have to play your best to win and to win this event for a second time is amazing.”

“And to have my name now on Tiger’s trophy is pretty amazing. It’s an amazing event and there’s been a lot of people here today. So, it’s just a cool atmosphere and to win his tournament is very special.”

“The thing is with the short pro career I’ve had, I tend to play very well early in the year and later in the year, so my next goal is to keep on playing like this throughout the year. It’s fun to end the year with a win and kind of now sit on the couch for a couple of weeks with a smile on your face.”

Of special note, it’s also the third occasion the Norwegian-born golfing sensation has stood alongside Woods at a prize presentation – twice now at the Hero World Challenge and firstly at the 2019 Masters when Hovland, as the Low Amateur, was inside the famed Butler Cabin as Woods was being fitted with a fifth Masters green jacket.

And the 25-year-old has now tasted success in five different countries, Puerto Rico, Mexico (twice), Germany, Bahamas (twice) and also the UAE, though he’s yet to win on US soil.

As well, and if you were looking for a European Ryder Cup line, Hovland’s win comes the same day that another European in Poland’s Adam Meronk captured the co-sanctioned Australian Open, and also his second success this year.

The Norwegian-born Hovland headed into the final round leading by three shots soon found himself under fire from Masters champion Scottie Scheffler who stormed into a tie with Hovland after just six holes with birdies at the second and fourth holes ahead of joining Hovland in the lead when the American chipped-in for an eagle ‘3’ at the par-5 16th hole.

However, it would prove the highwater mark of Scheffler’s challenge, and also his quest to return to World No. 1 as he needed to do by winning here at Albany, when the American bogeyed six and then found the water down the right-side of the ninth hole in taking a double-bogey ‘7’.

While Scheffler rebounded with birdies at 11, 14 and 15, Hovland was not to be denied in his quest to win a Woods handshake two years running.