Viktor Hovland successfully defended his title at the World Wide Technology Championship at Mayakoba in Mexico on Sunday, winning by four shots to secure his third PGA Tour victory.

The 24-year-old’s 4-under-par 67 in the final round at El Camaleón Mayakoba Golf Course had him finish on a tournament-record 23 under par. Hovland began the day with a two-shot lead and held off Mexico’s Carlos Ortiz, who ended his round of 66 with five birdies in six holes.

“I played pretty good golf throughout the week,” said Hovland. “I’ve been chipping it so good, making so many up and downs, it takes a lot of pressure off your long game. I’ve made some big strides and I hope I can keep it going that way.”

Hovland had extended his lead to six shots on the back nine, although Ortiz was able to get the difference down to three with a brilliant run of five birdies in six holes over the closing nine, yet it was not enough.

Ortiz’s closing 66 was good enough to earn him outright second on 19-under, the home player finishing a shot ahead of American Justin Thomas after the world No 7 was not able to close out with any type of run.

It was Hovland’s second title of the year, having won the European Tour’s BMW International Open in Munich in June, while he now has seven top-5 PGA Tour finishes in 2021. He became the fifth consecutive international winner on the PGA Tour, and now moves inside the top-10 in the official World Golf Ranking for the first time. 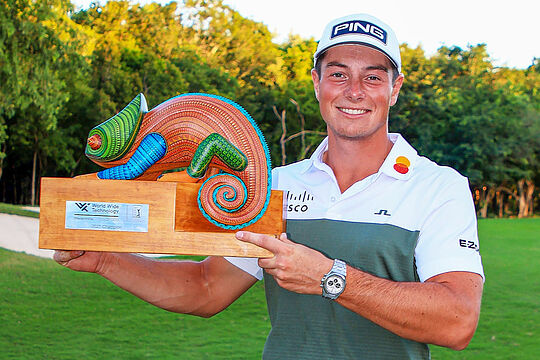 Success on the PGA Tour for Hovland was just a matter of time.

He became the first Norwegian to win on the PGA Tour by winning the 2020 Puerto Rico Open. As an amateur he won the 2018 US Amateur and earned invitations into the 2019 Masters Tournament, the 2019 US Open, and the 2019 Open Championship.

In 2018 he played in the Australian Open as an amateur, finishing tied for 13th place at The Lakes Golf Club in Sydney, and went on to turn professional following the 2019 US Open.

Hovland’s best result in a major is a tied 12th at the 2021 Open Championship.

Matt Jones and Lucas Herbert were the only Aussies playing in Mexico and both missed the weekend.