Hovland takes shine off Bling with US Amateur win

Norway’s Viktor Hovland secured a 6&5 victory over American Devon Bling on Sunday in the 36-hole final of the 118th US Amateur Championship at Pebble Beach Golf Links in California.

Hovland, 20, who is No. 5 on the World Amateur Golf Ranking (WAGR) and a junior at Oklahoma State University, was simply too strong in the final coming out of the blocks early and never relinquishing the lead.

Hovland took control of the match after winning four straight holes midway through the morning round of the 36-hole final and was able to keep the pressure on in the afternoon round.

The stats show that the Norwegian trailed for just one hole in six matches covering 104 holes at these championships.

“It’s really special,” said an elated Holland. “As I mentioned earlier, I’ve only won once before, and to win the US Amateur as my second win is really cool. I hope it’s the start of something great.” 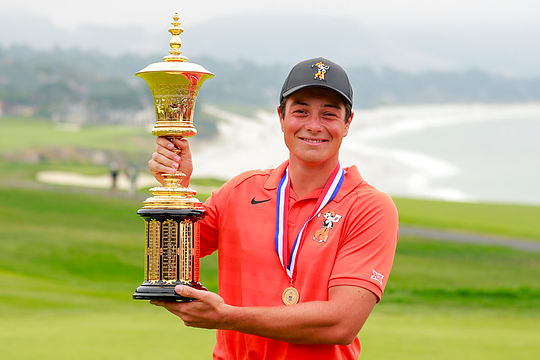 Hovland is the second Norwegian-born player to win a USGA championship, joining Arne Dokka, who won the 1965 US Amateur Public Links Championship, and he becomes the fifth player from Oklahoma State to win the US Amateur.

Hovland’s only other victory outside his home country came earlier this year at the Valspar Collegiate, one of his eight top-10 finishes for Oklahoma State.

Bling, 18, and in his second year at UCLA, made seven birdies in his semi-final victory over Isaiah Salinda on Saturday, but he made six bogeys in the morning against Hovland, and on two occasions when it appeared that he had the advantage, Hovland stole it back.

“I’m a little disappointed, but I gave it my all,” said Bling, ranked 302nd in the WAGR, who was also making his first US Amateur appearance and third in a USGA championship.

“It wasn’t the day I was hoping for, but I played really well all week. I battled really hard to get to this championship match. It’s just the beginning, it’s not the end.”

“Now I get to look forward to the US Open and the Masters, so that’s definitely a lot of positives coming out of this week.”

The best of the Aussies was Zach Murray going down 2&1 to the in-form American Cole Hammer in the round of 16.

Blake Windred, who also qualified for the match play segment, lost in the first round 6&5 to Chun An Yu of Taiwan. Dylan Perry who was the 17th seed also failed to advance past the first round going down to Jackson Van Paris, 1-down.

Bling will join Hovland at Pebble Beach next June for the 119th US Open and both players will earn a likely invitation to the Masters Tournament in April, provided they remain amateurs.

Hovland is also exempt into the 148th Open Championship at Royal Portrush.