Hovland, 24, collected his third win of the season and a second in a month after sensationally posting back-to-back eagles on 14 and 15 before birdieing the 16th. 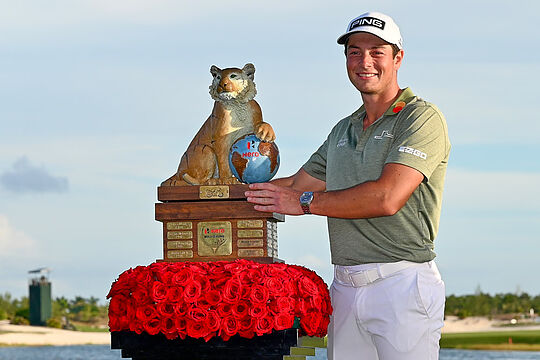 “I didn’t think a win was going to be very possible but this golf course is very tricky as you make a lot of birdies and make-up a lot of ground,” he said.

“I knew if I posted a good score out there you never know what would happen.”

“To win is really cool being a part of Tiger’s event for the first time and now to win is pretty special. I have not done really well in these limited field events, so hopefully that will now change going forward.”

Hovland’s win will see him jump Rory McIlroy at No. 8 and knock Bryson DeChambeau out of No. 7 on the World Rankings.

American Scottie Scheffler was runner-up and bounced back from a fourth hole double-bogey to birdie seven of his closing nine holes in a 66 for a 17-under par tally.

The biggest disappointment was Collin Morikawa, who headed into the last day leading by a handsome five shots and for all intents and purposes, looking a certainty to not only win for a fourth occasion this year but become the fourth player under the age of 25 to move to the top of the World Rankings.

However, shock double-bogeys at the fourth and sixth holes and then a bogey at the par-5 ninth had Morikawa reeling at five-over par.

It was not until the 11th hole the reigning Open Champion managed his first birdie but by then it was too late for Morikawa posting a shock 76 to drop back into a tie for sixth at 14-under par, and ending the year stuck at World No. 2.

And Rory McIlroy’s final round in his 14th full season in the pro ranks ended without fanfare in the Bahamas.

McIlroy walked from the Albany course with a 72nd hole bogey in a round of 70 for an eventual six-under par tally to finish near the tail of the field in the $3.5m event.

McIlroy had been sharing the lead on day one thanks to a sizzling 66 and what was also a great comeback after signing for a 74 in the final round a week earlier and letting slip victory at the European Tour’s season-ending DP World Championship in Dubai.

Sadly, for the final three rounds in the Bahamas, McIlroy was simply making-up the numbers with scores of 71, 75 and then his closing two-under par.

There was some joy for McIlroy before heading home to his young family and that was snatching a 15th hole eagle ’3′ although it was all too late.

It was the first time McIlroy had teed-up in formal competition on the host Albany course and now it’s some five weeks off before starting the New Year in the back-to-back Dubai Desert Classic and Abu Dhabi HSBC Championship on the renamed DP World Tour.

Hovland’s win will see McIlroy drop a spot to now be ranked World No. 9.