How a TV reporter helped win the 1998 Presidents Cup

The very first time the Presidents Cup travelled outside of the States was in 1998 to the famed Royal Melbourne course.

I had been present at Manassas in Virginia in 1996 when half the media contingent reporting on the then second Presidents Cup left the tournament on Friday night and headed north-east to Illinois after Tiger Woods, competing in just his third event as a pro, shot a second round 64 on route to a sharing 5th place at the Quads City Classic.

Woods eventually single-handedly commanded more space on the sports pages of most US newspapers than the Arnold Palmer-led USA Team, who won for a second straight occasion.

What I recall about the 1998 Presidents Cup was the manner in which five-time Open Champion, Peter Thomson captained his side boasting six Major Champions in Greg Norman, Steve Elkington, Wayne Grady, Nick Price, Ernie Els and Vijay Singh.

Many wondered how Thomson could mould together a team featuring six Australians, two Kiwis competing on Australian soil, two golfers from Japan who hardly spoke English and a player each from South Africa, Paraguay and Zimbabwe into one unit to produce the firepower needed just to dent the hull of the American juggernaut side. 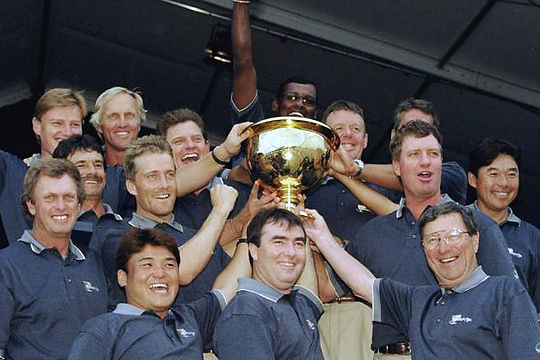 What I also remember about the 1998 Presidents Cup also was the heat, the humidity and the all too friendly ‘down under’ flies.

The opening Friday Foursomes match was announced as the all-New Zealand duo of Frank Nobilo (No. 60 in the world) and Greg Turner (62) facing the might of O’Meara and Duval, with O’Meara the reigning Masters and Open Champion.

However, it was a comment by a well-known US-born TV golf reporter after the naming of the Friday Foursomes that caught the attention of Thomson and his International side.

This journalist, who has worked for ESPN and NBC, belittled the pairing of Nobilo and Turner suggesting it would be no match against the Star Spangled teaming of O’Meara and Duval. The remarks infuriated Thomson and his team.

In fact, Thomson and the International Team used the remark to not only win the match 1-up, with Nobilo holing a 40-foot birdie putt from the back right fringe at the final hole for the winning half, but to go on and win by nine points. The biggest defeat ever of an American team in professional match-play at the time.

Nicklaus had been in charge of the team and also led the first USA Ryder Cup team to lose on US soil.

Nobilo and Duval are co-commentators at the Golf Channel and they recalled that match 19-years ago.

“O’Meara had won two Majors and Duval was No. 3 in the world and Greg and I had no right but then we were 1up on the 18th and David splits the fairway and with either a wedge or 9-iron Mark hits the second into about two-feet,” said Nobilo.

“I had wrong clubbed Greg as he wanted to hit one less into the green but his shot landed well in the back left of the green.”

“I was so excited that I nearly broke my hand slapping Greg’s in delight.”

“But then anytime you get to beat Duval and O’Meara and then go on and defeat America that’s special.”

“It was just the start of an amazing week as in 1994 we had been waxed in the first session to be down nil and five, so when 1998 came along the turnaround and the victory was just magnificent”.