American Charles Howell III ended an 11-year wait for a PGA Tour win by claiming victory at the second play-off hole of the RSM Classic at Sea Island, Georgia.

The 39-year-old holed a 3 metre birdie putt on the 18th to edge out fellow American Patrick Rodgers to claim the title. Howell started the RSM Classic’s final round with a one-shot lead.

It was the sixth 54-hole lead of his career and he’d lost the previous five moving in to the final day. Not this time as Howell two-putted the par-5 15th for birdie, then he holed an three metre birdie on 16 and then hit his tee shot to a metre on the par-3, 17th.

Two groups ahead, Patrick Rodgers birdied the 18th hole to go a shot ahead meaning that Howell needed to make his putt on 17 if he wanted to win and he did. A missed birdie on the 18th saw the pair in a play-off situation.

After watching Rodgers miss a birdie putt on the first playoff hole, Howell narrowly missed his putt from the fringe for the win. Rodgers putted first on the second playoff hole. He missed again. This time, Howell nailed his two metre putt for the breakthrough victory which has been coming for some time. 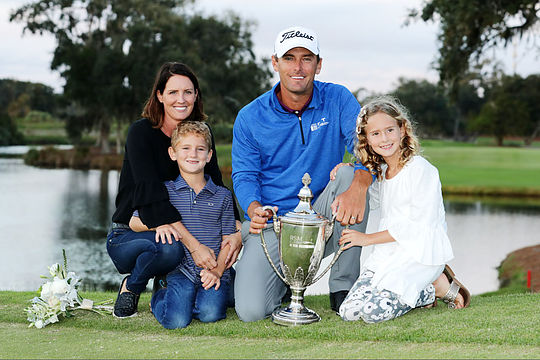 Overwhelmed with relief, Howell sank to the ground and grabbed his face with his hands.

“Quite honestly, I didn’t know if I would ever win one again,” said Howell. “I had come up short so many times. To hang in there, to turn it around, the way the guys were playing around me…I needed some good fortune on my side and fortunately had it. It means a lot because I hung in there. It means I can still win out here.”

Howell, who led outright after each of the first three rounds, closed in 3-under 67 to finish the week at 19 under. With that, Howell captured his first PGA Tour title since 2007 and his third overall.

Howell has been a professional for nearly two decades and has won more than $35 million in earnings. He’s never lost his card and he’s qualified for every edition of the FedExCup Playoffs, yet Howell before Sunday had only won on the PGA Tour twice. He has played 529 PGA Tour events and has 16 runner-up finishes and finished 3rd nine times.

Howell earned US$1,152,000 and a start at his hometown of Augusta, Georgia, in April to play in the Masters for the first time since 2012.

Rodgers, 26, matched his career-best PGA finish with the runner-up effort after failing in his first PGA play-off.

“It has been such a long building process the past year and a half. All the hard work paid off with how well I played this week,” he said.

“I’m gutted to not get it done but congrats to Charles. I fought as hard as I could and I didn’t really back down. I stayed aggressive and I made birdies all the way to the finish. It’s a testament to how well Charles played.”

Webb Simpson fired a closing 65 and had a 2 metre birdie opportunity at the final hole to join the playoff, but he missed. He lost the RSM Classic in sudden death to Ben Crane in 2011 also.

Luke List and Ryan Blaum tied for fourth at 17 under, and Tour rookie Cameron Champ finished alone in 6th at 16-under.

The PGA Tour now moves Down Under for the $7 million ISPS Handa Melbourne World Cup of Golf at the Metropolitan Golf Club.