Huang, who is 83rd in the World Amateur Golf Ranking, started the day tied for the lead at 8-under-par but slipped way behind with bogeys on the first and fourth holes. Vongtaveelap, on the other hand, made a birdie on the second hole and then sensationally holed her second shot from 103 metres on the par-4 third hole to open a four-shot lead. 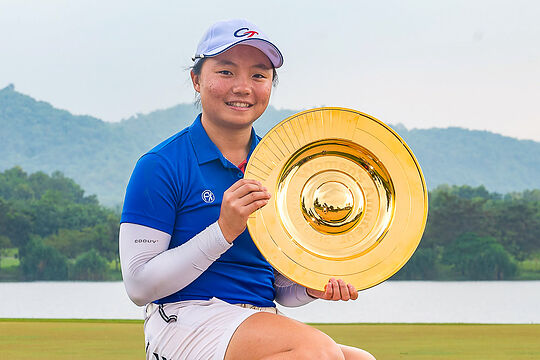 Huang, 17, then birdied six of her last 11 holes for a three-under final round of 69 and to finish on 11-under-par for the tournament.

“I felt very nervous because Sim put some pressure on me over the closing holes. I didn’t do very well on the front nine, but I was thinking very positively on the back nine,” said Huang.

“The shot on the 12th was a turning point, because I got very lucky there. My ball was in a footmark there. But on the 18th, I didn’t think too much. I just felt very confident on that shot.”

Justice Bosio finished the best of the Australians in a share of 19th position, with Kelsey Bennett in a share of 21st position. Sarah Hammett and Kirsten Rudgeley shared 35th, with Caitlin Pierce in 39th.

Ting-Hsuan Huang receives invitations to play in two major championships, the AIG Women’s Open and Amundi Evian Championship, as well as the Hana Financial Group Championship and an exemption into the Augusta National Women’s Amateur Championship.