Mackenzie Hughes and Sepp Straka were locked in a classic two-hole playoff before Hughes drained a birdie to claim victory in the Sanderson Farms Championship on the PGA Tour.

Sunday’s win was Hughes’ second on the tour after he last won in 2016 at the RSM Classic, again in a playoff defeating Blayne Barber, Billy Horschel, Henrik Norlander and Camilo Villegas.

In the playoff both parred the 18th, Hughes scrambling from a bunker fronting the green. They returned to the 18th again and, for Hughes, the third time in a 45-minute span hit a perfect drive, then a 150 metre approach shot to within 2 metres of the cup. After Straka missed his 2 metre putt for birdie, Hughes poured his into the centre of the cup for the win.

Hughes pocketed US$1.422 million and picked up 500 points to lead the standings for the first time in his career.

“I’m over the moon,” said Hughes. “I had some moments today where I was tested and was able to pull through.”

“It’s kind of my M.O. a little bit…to scramble and save some pars. I had to do that a little bit today on the back nine. Yeah, did everything I possibly could, just grinded my butt off, and luckily it was good enough.”

Straka, from Austria, was looking for his second title of the calendar year after winning the Honda Classic in February following a closing round 66 to beat Shane Lowry and in the process become the first Austrian to win on the PGA Tour. Straka had played collegiate golf at the University of Georgia from 2011 to 2016, before turning professional in 2017. 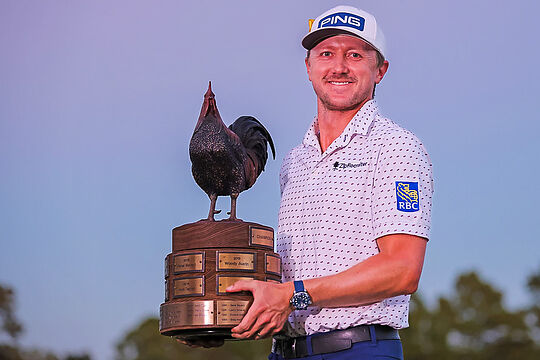 Higgo finished just a shot off the pace after a closing 68, one stroke ahead of countryman Dean Burmester, who carded a 67.

Harrison Endycott was the only Australian in the field and missed the 2-under cut with a 3 over total.