Huntingdale Golf Club has denied Victoria the Golf Victorian Metropolitan Women’s Division 1 flag with a 4&3 victory on Sunday to win its first Division 1 Pennant since 2006 and the club’s 13th Women’s title since the competition was first formally played in 1910.

This was a classic final encounter against the much touted and heavily favoured Victorian lineup against a determined underdog, with the Huntingdale team playing aggressive golf and looking to rain on the Victorian team’s parade. 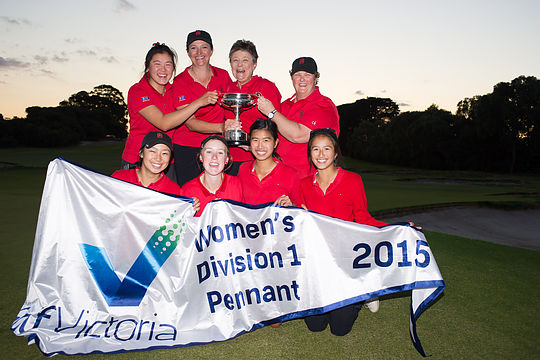 Earlier victories to Tracey Carte at number 7, Kallista Do at number 5 and Captain Emily Smith at number 4 from Huntingdale had been partly matched with Victoria wins to Anna Gavardinas at number 6 and Olivia Kline at number 1.

The deciding match came down to a nail-biting battle between the number 3 players Victoria’s, Sue Wooster and Huntingdale’s, Lisa Teo.

After Victoria’s number 2, Kono Matsumoto, secured a 1-up win against Huntingdale’s Helen Gubbels, the outcome of the final had turned on the Wooster & Teo encounter.

Early in the match Teo trailed by as many as six holes before staging an amazing comeback to level their match at the 17th. After both players halved the 18th, they headed for the 19th and ultimately deciding hole.

It was here that 22-year-old Teo played a stunning approach to within a metre of the hole with the resulting birdie capping off a remarkable comeback and giving victory to Huntingdale.

This is the second year running Victoria have finished runner-up in Division 1 and the disappointment was obvious with team members who had played so well all season, only to see another opportunity slip. Three players from Victoria, Anna Gabardines, Sue Wooster and Kono Matsumoto, ended the season undefeated – the only Division 1 players to do so.

Victoria will again be a team to deal with next season and will undoubtedly return stronger and better.

Division 5 had The Heritage defeating Cranbourne, 5-2.